Some people might say opera is too long, out-dated, snobby, and boring. Opera Philadelphia challenges those voices with its O17 Festival: 12 days of dazzling opera celebrations with 7(!) programs in the city’s premier art venues and the museums. Alongside several world premieres, the festival presents Mozart’s THE MAGIC FLUTE at the Academy of Arts in a dazzling rethinking of the last and one of the most well-known operas composed by Wolfgang Amadeus Mozart.

Since its premiere in Vienna in 1791, the opera has been loved for its exquisite and delightful music and the crowd-pleasing plot. It has been performed countless times all over the world.  Many of us, opera lovers or not, have heard bits and pieces of its music.

Like any other enduring works of performance art, THE MAGIC FLUTE has been reinvented and recreated over the years as society and our ideologies have changed. The production presented at O17 is from Komische Oper Berlin, co-produced by 1927 (a London-based, multi-awarded, one-of-a-kind performance company that was founded in 2005 by director, writer, and performer Suzanne Andrade and animator and illustrator Paul Barritt). Opera Philadelphia’s version is well worth the pain in the butt from sitting in a theater chair for three hours. 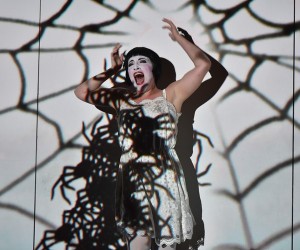 The stage contains no set except one giant white wall like a screen of a movie theater. The fantasy that Mozart created, the quest of charming prince Tamino and the bird catcher Papageno to rescue princess Pamina, is reinvented in the style of a black-and-white silent film, with imaginative and colorful animations projected onto the wall.

Instead of a flute, Papageno (Jarrett Ott) carries that ultimate bird-catcher, a black cat. The magic flute that has a power to change sorrow to joy is a fairy, and the bells that protect the travelers from harm are girls in garters and red stiletto shoes. 1927’s animation not only narrates the story in depth but also visualizes Mozart’s exquisite music, deepening our connection with the sounds.

This production may have been a bit of challenge to the singers. Unlike other operas where singers can move and use their bodies to sing freely and to be expressive, in this MAGIC FLUTE they are required to be on small foot stools and to secure themselves to flipping doors on the white wall. They also need to synchronize with the animation while singing some very demanding opera songs.

Jarrett Ott is simply astonishing as an actor and an singer. His Papageno is charming, honest, and warm as sunshine, just like his singing voice.

Other roles, the Queen of the Night and Sarastro, have the well-known arias that require a rare high F6 and F2 respectively. Olga Pudova’s Queen of the Night is neither fierce nor flamboyant, but suitable for queen spider in this production, who binds her daughter and holds the fate of Tamino and Pamina. The famous coloratura part of the area is as bewitching and astonishing as her voice, which sounds magical like a crystal bell. In his silk hat, tuxedo and white beard, Peixin Chen depicts his authoritative and fatherly role Sarastro with rich voice.

Since it was made some 225 years ago, some of the lyrics may jarr as out-dated or  misogynistic by today’s standard.  Still, the beauty and the power of Mozart’s music live with THE MAGIC FLUTE and inspire us with true and genuine emotions.
[Academy of Music, 240 S Broad Street] September 15-24; operaphila.org/whats-on/on-stage-2017-2018/the-magic-flute