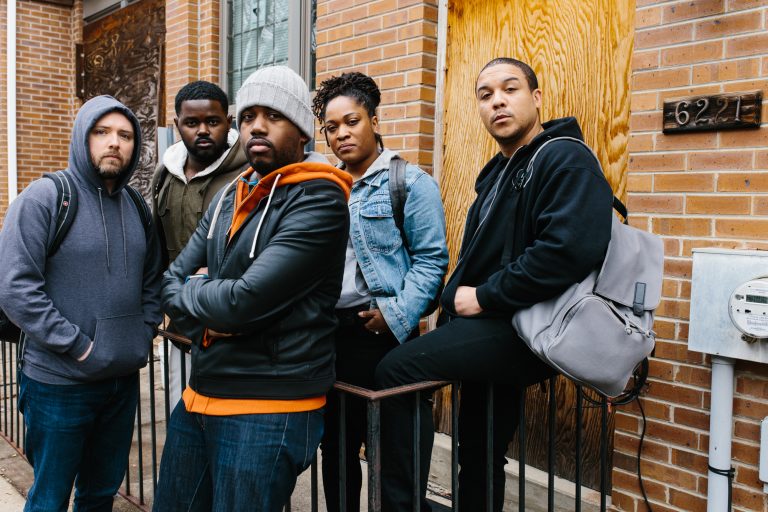 In 1985 a standoff between police and black liberation group MOVE ended when the department dropped bombs on the group’s home on Osage Avenue in West Philadelphia , killing 11 people, including 5 children. These events provide the documentary-reel subject for the first song of a new opera WE SHALL NOT BE MOVED, a musically, visually, and politically rich entry into Opera Philadelphia’s O17 Festival and the 2017 Philadelphia Fringe Festival.

Fastfowarding to 2017 under a backdrop of well-choreographed photographic and video projections by Jorge Cousineau, we meet a group of North Philly youths led by 15 year old Un/Sung (Lauren Whitehead), who delivers much of her text in poetic spoken word. She is joined by three broadly drawn Johns: a religious man (Adam Richardson), a white ex-con (Daniel Shirley), and a transitioning female to male (John Holliday); each getting a brief character explanation (bad stuff) in verse. Including a trans character does more than check a box with an intersectionality cross and showcase Holliday’s impressive countertenor, it highlights a major theme of the opera: the body. The inevitable mistreatment and preconceptions of the black body forms much of the libretto by Marc Bamuthi Joseph, to rhythmic, string and bass saturated music by Daniel Bernard Roumain.

The new MOVE family “migrates” from North Philly to West Philly, finding refuge at a home on the site of the old MOVE house. There they meet police officer Glenda Ramos (powerful mezzo-soprano Kirstin Chávez), a latina “ghetto flower planted in the law.” The first act establishes the themes, character, and plot, the second act takes place in the confines of the new MOVE house, haunted by OG’s, the graceful break-dancing ghosts of former residents. There’s little dramatic progress in the act — the limits of the form give the characters insufficient development to reward the emotional inferno and too-neat plot coincidences. Our engagement and catharsis come from the moving (!) music and images, which portray contemporarily relevant ideas and themes which rarely grace an opera stage.