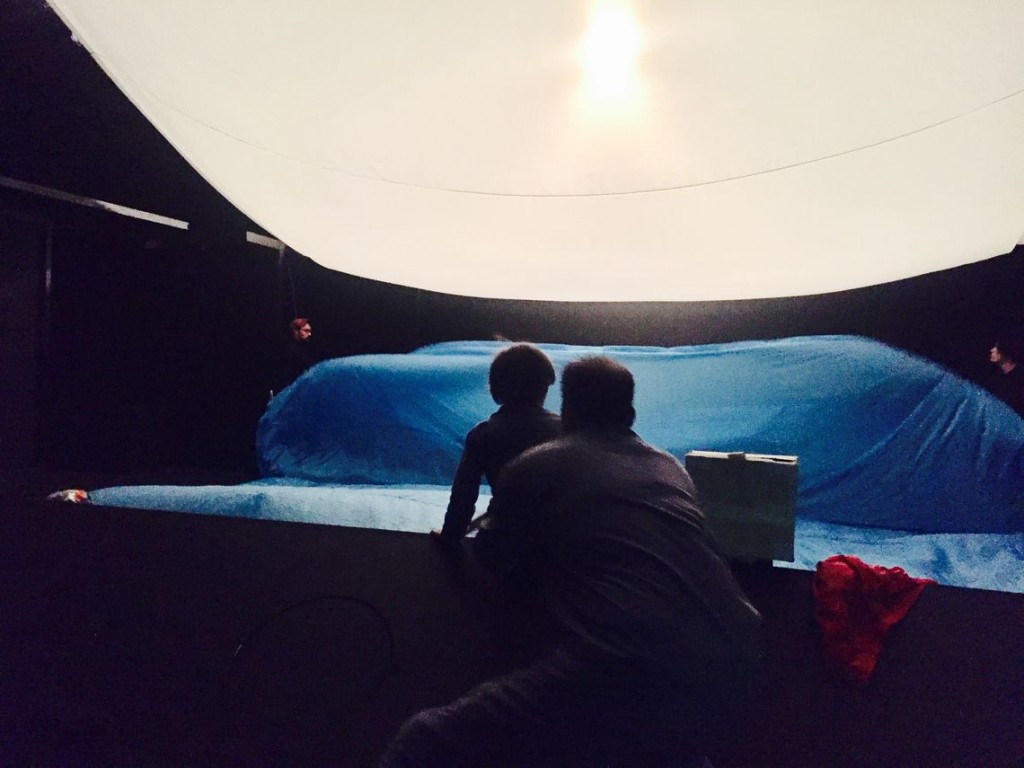 Through a lighted dormer window a boy searches the night sky with his little telescope. He doesn’t want to go to bed, which frustrates his father, who wants a bit of grownup time to relax with his jazz. But the little boy can’t sleep because his toy whale has gone missing. A model of childrearing forbearance, the dad relents and connects with his son’s imagination. On a quest for the missing whale, actors Winslow Fegley and his real-life father, Michael Fegley, in matching PJs, embark on an adventure in set design. Like all Thaddeus Phillips’s, work this story relies on movement more than spoken word. Juan Gabriel Turboy’s music and extra sound effects are tied very specifically to the action. There’s no absolute-precision video as there was in Phillips’s ¡El Conquistador!. And although this is travel-based like 17 Border Crossings and Flamingo/Winnebago, no illusory ‘real’ locations are visited as the boy and his father search in an imaginary world under a vast sky. Low-tech wizardry with cutouts, huge waves of fabric, and other surprising props transform a black stage into the various bright environments of a journey of the mind. Like child’s play, it’s not high-tech but high imagination.

It looks like a father’s love went into the making of this big adventure, Phillips’s warmest work yet. The boy is a little bit naughty, but a can-do kid. And Winslow shows what a talented (and well directed) boy can do. A BILLION NIGHTS ON EARTH, laced with comedy that appeals to children and grownups alike, doesn’t talk down in old fashioned “Children’s Theater” style. It gives kids some credit. During the show a wide-eyed little boy seated in front of me whispers to his mother every few minutes. It’s unusual to find a show for families in the Curated Fringe, which attracts sophisticated adult audiences. At the sold-out performance I attended the crowd was sprinkled with a few children. Do you remember the first theatrical show you saw as a child? Did it make an impression? This show’s short Fringe run is over now. If only it could be extended! But if not, you can see it at BAM in November. If you go, bring a kid.