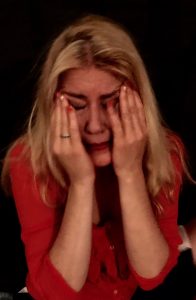 How did Kellyanne Conway go from Hammonton, New Jersey blueberry-packing champ to the first woman to manage a successful U.S. presidential campaign? That is the question the 45-minute fictionalized biographical comedy THE PASSION OF KELLYANNE aims to explain. The answer provided by the many scenes of Conway’s formative years amongst a gaggle of Roman Catholic-observant women relatives and with an absent father: Daddy complex, leading young Kellyanne to conflate daddy with God, Ronald Reagan and, eventually, Donald Trump.

The simpler, funnier answer to Kellyanne’s political celebrity also here presented: her ability “to smile while talking,” and talking and talking as is demonstrated in one of the play’s best scenes, a tableau where all four actresses who play Kellyanne hold up picture frames suggesting TV screens while gleefully defending their man.

But Leanne Velednitsky was the cast standout for managing to bring some freshness to the role of Trump. Playwright/director Andi Stover presumably deserves credit for having Velednitsky break out in Russian dance in a wordless, subtle nod to Trump’s Russia problem. (And when was the last time the word subtle appeared anywhere near the word Trump?)

I can’t say THE PASSION OF KELLYANNE is funnier than Kellyanne’s actual TV appearances. But that says more about the problem with today’s White House than problems with this play. And to quote Kellyanne’s boss, sad!