A few years ago, Kash Goins’s production company, GoKash OnStage, presented a version of 12 Angry Men using only African American actors. Like his other all-black productions, the reworking shed new light on both the well-known work and our preconceptions of race. His original play, SEVENTY IV SECONDS … TO JUDGMENT now running as part of the company’s residency at the Arden Theatre, is something of a 12 Angry Men for our time.

Here, six jurors sit in a room (three black, three white, four men, two women). That’s how many real-life jurors decided unanimously to let off George Zimmerman for the shooting of unarmed black teenager Trayvon Martin, just one name in a long list of similar acquittals. In a tightly written 80-minutes, Goins explores the question: how could this happen?

His answer, such as it is, requires insightful peeks into both American justice and the varied perspectives of Americans white and black. Goins plays Bill, a successful black businessman, who has much in common with and much he resents about fellow juror Brandon (Travoye Joiner), a younger African American who looks to female juror Ramona (Erin Stewart) as a mother figure. 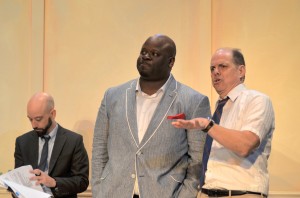 The jury is deadlocked in considering whether a white man was justified in a killing because he felt threatened by an unarmed black teenager. Brandon recalls his acting classes and asks the jury to reenact scenes from the trial.

This feels like a dramatic pretense at first, but proves remarkably successful. It allows Goins to alternate between empathetic portrayals of black victims and white killers — including dialog taken from real cases (“I’m in my car, why do I have to put out my cigarette”) — and courtroom deliberations which reveal insight into different viewpoints.

White juror Doug (Steve Connor) resents  “black privilege” in the ability to call white people racist while expressing racial pride which would be judged abhorrent if expressed by a white person. White liberal Pat (Aaron Roberge) thinks he’s nothing like Doug even if he enacts and acknowledges systemic racism. And Kim (Emily Davis) finds it amusing but just wants to go home to her family. Goins is able to understand and represent six diverse characters and posit a plausible narrative for how these jurors could veer toward a prima facie reprehensible decision.

Just as Goins’s V to X took off from real-life incidents of injustice to address racist mass incarceration, SEVENTY IV SECONDS leaps from its inspiration in true acquittals. Both shows go beyond political commentary or consideration of race. Goins is understanding not just of “viewpoints”, but of people; his characters aren’t vessels for hot-topic discussion, they are individuals.

All the actors are non-equity, with previous roles mostly on the fringes of Philadelphia theater. On the evidence of this show, all (Stewart especially) deserve more consideration. But so does Goins’s work: let’s hope the Arden residency is a step towards increased recognition and professional outside productions for his strong dramatic voice.