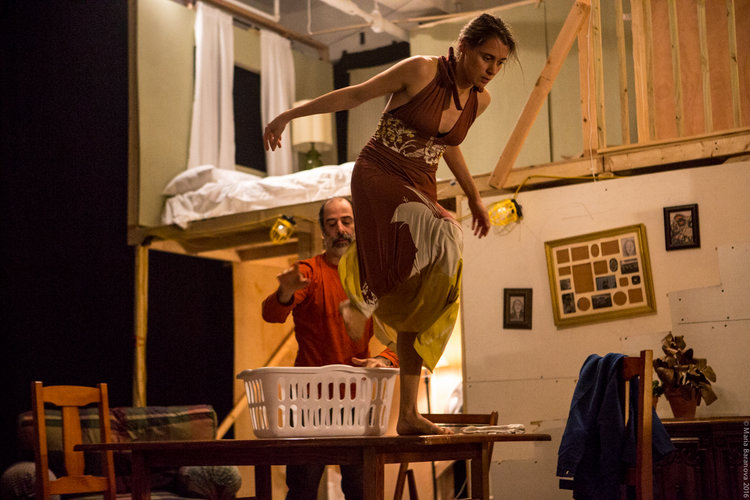 Actor, creator, magician and illusionist, Geoff Sobelle performs miracles. What a wild idea to construct a house on the stage— bring in fixtures, furnish it and then haul in inhabitants. Yet with all the assembly and building, and all the acting, physical comedy and activity, this is, at heart, a thought piece. Conceptually HOME is not far off from his magnificent THE OBJECT LESSON, with its mining of memories. But where that show was about rummaging in the past and looking back, HOME is about simultaneity and mostly about the transitory nature of a house, a home. Unless you’ve already read about Sobelle’s HOME, you get it kind of gradually. If you haven’t seen the show yet, but plan to do so, go experience it – and hold off on reading.
I
In a clever devised performance, former and subsequent residents of a house co-exist without realizing it. They’re in and out of the bedroom or the kitchen or taking a shower, doing everyday things that take place in a home —minus the universals of sex and TV, that is. In a strange, unreal time-lapse realism, people appear and disappear, and something is always going on. In his THE OBJECT LESSON, the magic is saved for a surprise at the end. In HOME mind-boggling humorous magic is dispensed throughout, and the very best tricks occur early on.
A Dylanesque troubadour, who exists on a different plane from the occupants, shows up from time to time, playing various instruments and singing what seem to be intricate songs. Unfortunately, from my seat in the back half of the theater, I caught at best 20% of the lyrics. Around the edges, barely integrated into the work, a couple of women recite descriptions of the layout of their childhood houses. This may have been intended to make things more experiential, spurring audience members to think about their own domiciles. HOME is full of both wonderful things and excess— deliberate excess that runneth over late in the piece. A big ungainly party doesn’t play out as well in reality as it might in concept. A mob has amassed for a mashup of major events that have taken place in the house. With subtle help from his lieutenants in other rooms, Sobelle, in the main room, manages to stealthily direct participants. Yet this penultimate and endlessly accumulating scene lags as the party drags on. The guests over-stay their welcome and they should all go home. But wait, this is/was their home.

Geoff Sobelle is an artistic genius I’ve admired for years. So I figure that any issues I may have can’t lie with him. So it must be me. Happily, in the end an artful and solemn coda brings it all back home.