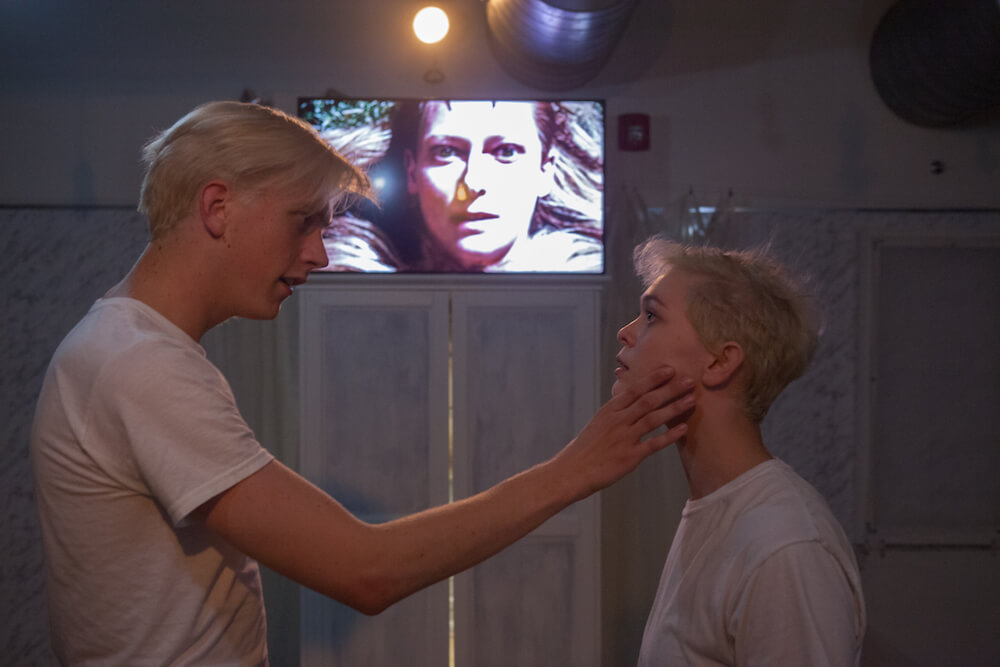 Two young, blonde, somewhat androgynous twins emerge whole from a wardrobe. Named Artemis (Hannah Van Sciver) and Apollo (Nicolas Scheppard), they encounter their adopted parents only via a TV screen on top of their bedroom wardrobe, on which they also watch The Lion, The Witch, and The Wardrobe.

They build a mythical world of secret rituals: special handshakes, dream sharing, playacting the stories of their ancient namesakes. Then, one day, they fall in love—with C.S. Lewis’ white witch, played by Tilda Swinton. Who cares if she’s the movie’s villain? We look just like her! they cry, and decide they must be the witch’s children. Swinton lore gets sutured to their shared philosophy. Their dogma becomes a bizarre mashup of ancient Greek myth, Swinton movies, and the legend of the actress herself, to whom they direct letters, emails, and direct prayers.

The play begins as a story about celebrity and myth-making, stressing that it can be hard to tell madness from culture from ignorance. It’s harder to track in the later scenes, when the twins grow older and the play becomes about their diverging lives. There is magic in Van Sciver and Scheppard’s performances as the young twins, embodying the innocence of unrestrained physical impulse and childish ebullience. But I never care much about their characters, who seem identical from the start; it is the development of their mythical world that feels real, and when that is lost in the rapid advancement of time, it feels like the play is, too.