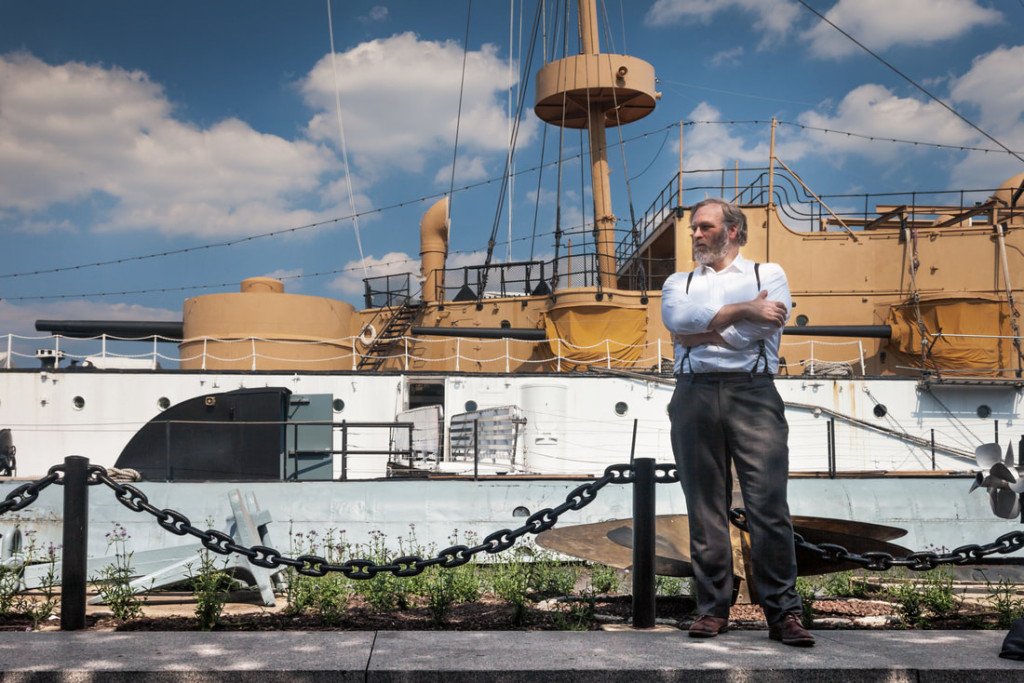 You probably haven’t seen or read IPHIGENIA AT AULIS, a lesser-known work by 5th-century BC playwright Euripides, but if there’s an ideal company to introduce works of classical theater, it’s the Philadelphia Artists’ Collective. Under Dan Hodge’s characteristically taut direction, this intimate site-specific production takes place on the Cruiser Olympia, a remnant of Teddy Roosevelt’s Great White Fleet now moored on the Delaware waterfront. It fits: Greek leader Agamemnon (a superbly dignified Nathan Foley) finds his huge navy moored in becalmed waters on the way to fight the Trojan war. To release the ships, the gods demand the life of his eldest daughter, Iphigenia (Becca Khalil). She comes to Aulis with her mother Clytemnestra (Tai Verley) under the pretense of a betrothal to war hero Achilles (Gregory Isaac). (The play may be obscure; the characters have Homeric fame.)

Euripides recalls the discussion by his contemporary Thucydides of the siege of Melos, which took place in 416 BC, a decade before the play’s premiere. In pursuing its war against Sparta, Athens resorted to massacre and terror. The cost and compromises of war lay not just in lives, but morals. In the play, Iphigenia’s life becomes a point of moral conflict between Agamemnon and his brother Menelaus (Luke Moyer) (husband of Helen of Troy); Achilles will fight for her to defend his own honor. Eventually, dramatically, Iphigenia asserts control over her own body. The plot may come from Greek myth, but the cast display masterly controlled human emotions (Foley’s silences; Verley’s boat-filling scream). PAC once again finds the personal humanity in a classic text.