“The streets were dark with something more than night”
—Raymond Chandler 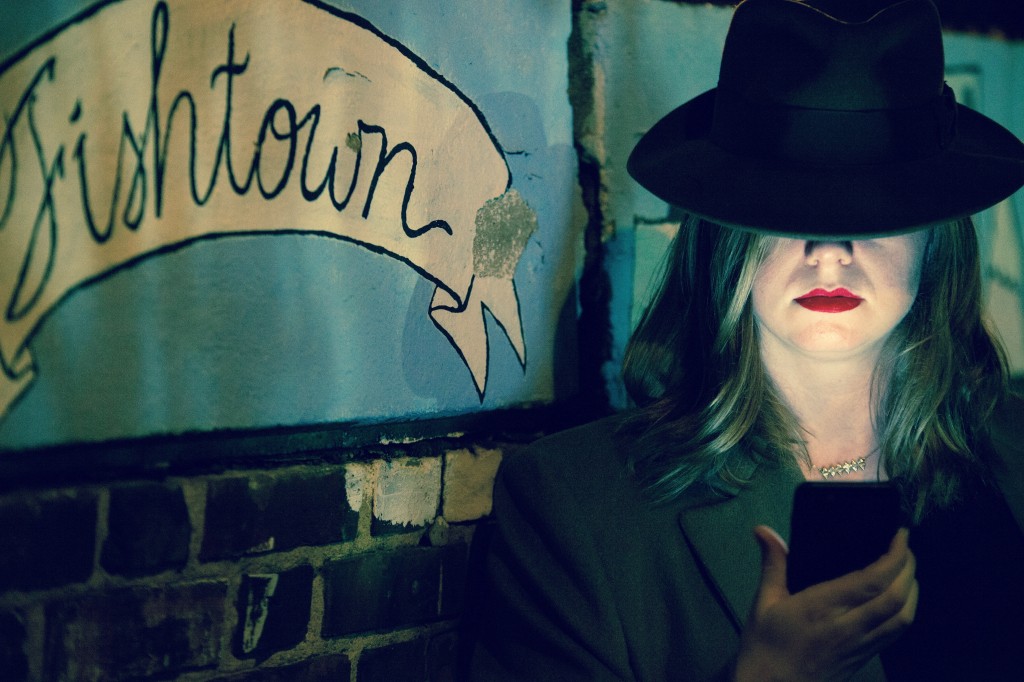 Snap-brim hats, light and shadow, sound, mood, hardboiled talk. Retro meets cutting edge in the geometry of Caitlin Weigel’s script, where cultural references collide with non-stop humor.  There are three guys: the good, the bad, and the illusory. And two dames: a private eye who spews wisecracks and a clever, unassuming secretary. The lonely private dick, Sarah aka “Lo,” knocks back the 80 proof, and in a leitmotif converses with a shadow. She makes social gaffes: In a world addicted to living online Lo consults a telephone book and actually talks on the phone, like “some kind of Civil War grandmother.” When a media-saturated villain (dressed down in a tech-founder tee) plots to pull off a hi-tech caper, a raw deal, our intrepid investigator attempts nothing less than the takedown of the sinister enterprise. But could bad media actually ease her loneliness?  In this stylish but treacherous terrain, people and things may not be what they seem.

Screens serve as iconic Film Noir venetian blinds in Peter Smith’s versatile set that’s all about design. Robin Stamey’s lighting is key. Zachary Chiero‘s intricate choreography is everywhere— with precision cues, acrobatics, and original (actually adorable) fight and dance interludes. A parody submerged in Noir aura, it hits its marks. All that’s missing is voice-over and badass Terry Brennan. Cool and sometimes ridiculous, FISHTOWN’s a winner. I’m pret-tysure you haven’t seen something just like this before. This is what you’re looking for. This is Fringe. Tribe of Fools delivers the goods… again.