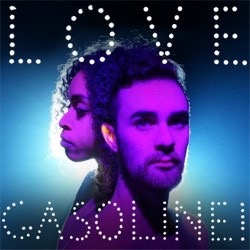 This one’s a tough show to either understand or describe. It intimates eroticism, but is not, itself, erotic. The title refers to an arcane line in one of Marcel Duchamp’s hundreds of notes on his work, The Bride Stripped Bare by her Bachelors, Even [The Large Glass], which resides in the permanent collection of the Philadelphia Museum of Art. I’ve visited the work countless times. It’s a big piece of conceptual art by a rebel-genius who was inconsistent in his own ideas about it. Much of the work is accidental, as it broke in transit and Duchamp got around to fixing it a decade after it crashed. His notes on The Large Glass contradict each other over time, but in one he comments on sexual attraction, writing that the shape that means the Bride is a steam engine with a motor with quite feeble cylinders and a reservoir of “love gasoline.” The forms at the bottom of the glass are Bachelors whose “eros matrix” connects through “capillary tubes.”

Duchamp’s once scandalous painting, Nude Descending a Staircase No. 2 (also in the Philadelphia Museum of Art) is referenced in the performance by a man in a nude suit who seems to exist on a different plane from the Bride/Bachelors pair. He usually hangs around the edges and says he likes stairs. Or rather, he doesn’t say it. It’s more abstract. He lipsynchs a woman’s voice. “I want to feel what it feels like to be an idea of a nude.” Images are rear-projected on a large screen at the back of the space. Among the projections are filmed close-ups of the woman who is speaking. Duchamp’s works are not featured on the screen as references to help in the deciphering.
So it’s no wonder that this complex devised work by Cal Arts comes across as esoteric and remote. There’s fine original music and sound, articles of clothing drop off on the screen, and two lovely actors-dancers clad in black look directly at the audience and smirk and smile and so forth as they dance and recite what seems to be a long, repetitive provocative sort of poem. They are not really connecting with each other, their stylistically erotic moves stripped of eroticism. Without a knowledge of Duchamp’s work this one would be a real head scratcher. With a knowledge of his work, it’s a head-scratcher, but surely an artistic one. Conceived and directed by Stacy Dawson Stearns.
[Lochend Close, Cannongate, Edinburgh, August 24, 2017 lovegasoline.com, media@edfringe.com ]