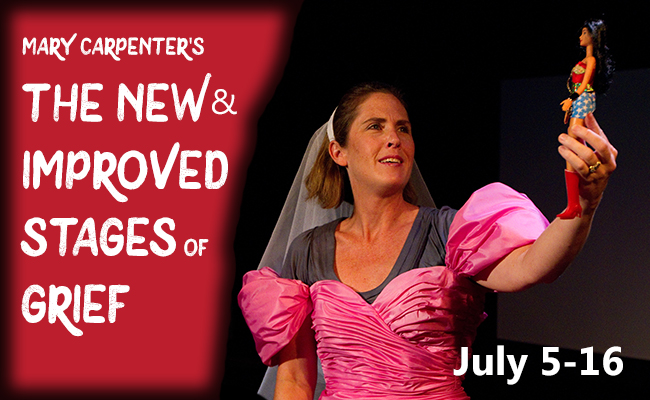 You’ve likely heard the adage that comedy is tragedy plus time. But sometimes humor is exactly what is needed to endure a dark hour. The acclaimed comedian and actor Mary Carpenter makes this point with style and verve in THE NEW & IMPROVED STAGES OF GRIEF, a pleasing and poignant monologue that deals with the minefields associated with loss, both expected and unexpected.

The deaths of her prom date, a cherished friend, and her “godlike” oldest brother caused Carpenter to examine how, individually and collectively, we deal with death. She takes umbrage with Elisabeth Kubler-Ross’s famous staging system, which doesn’t quite encompass the entire emotional experience. Anger is a little too sterile; “what the fuck?” is more appropriate. Denial is on the money, but it takes several forms: deep dives into Facebook; Law and Order therapy; endless gossip magazines and glasses of wine. Depression not only comes and goes, but it apparently costs a lot of money, which Carpenter explores in an audience-participation segment of grief financial counselling. (Spoiler alert: You might want to set aside a chunk of change for self-care.)

Carpenter’s instincts as a humorist are unimpeachable. She lets it be known off the bat that nothing is sacred, and the show’s funniest moments are often the most taboo. (Wait until you hear some of the inappropriate things that have been said on funeral receiving lines.) But the overall sense of levity is not without several genuinely affecting moments, as when Carpenter discusses “the Our Town paradox”: the idea that every death occasions a recommitment to living life as fully and authentically as possible. It is a promise that most won’t keep, and we know it, but sometimes we lie to ourselves in order to get by.

The play is far from perfect. Carpenter anoints herself a “tour guide of grief,” but in focusing on the universal elements of the experience, she sometimes neglects the specifics. I would have liked more introspection on how these clearly momentous deaths affected her personally. Carpenter flirts with this level of reflection, but mostly ends up scratching the surface. A reference to thestrals—the winged horses in Harry Potter that can only be seen by those who’ve survived a trauma—is not as profound as Carpenter thinks it is. The hour-long show ends abruptly, as if in mid-thought.

Yet in the hands of such a skilled performer, the flawed are forgivable. THE NEW & IMPROVED STAGES OF GRIEF shows us that comedy isn’t necessarily tragedy plus time; it’s more of a complicated menage-a-trois. And it’s okay to laugh through your tears.