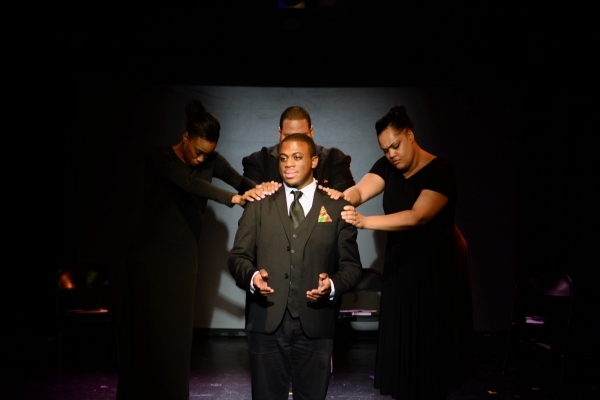 Last week, when one of my editors in Philadelphia asked me to join him for the regional premiere of MOTHER EMANUEL: AN AMERICAN MUSICAL PLAY, I wanted to refuse. I had never told him that my family and I have been members of the African Methodist Episcopal church (A.M.E.) for decades, nor did I tell him that the mere thought of someone re-conceptualizing the horrific massacre of the Emanuel Nine as a musical initially put me at great unease. When I first thought of this genre, my mind went to Broadway: big flashing lights, overdesigned sets, and songs about the “one who got away.”

MOTHER EMANUEL, conceived and directed by Rajendra Ramoon Maharaj and co-authored by Maharaj, Christian Lee Branch, and Adam Mace,graciously avoids all of these tropes. We were not exposed to overblown dramatic subplots, extravagant musical numbers, not even any references to the murderer.

While set during the fateful Bible study on June 17, 2015, this show doesn’t look to incorporate the traditional framework of an A.M.E. Bible class to structure its production. Instead, MOTHER EMANUEL presents itself as a 95-minute worship service. Gospel hymns—including “Amazing Grace” and “The Old Rugged Cross”—carry this production.

The director enhances the show with a variety of choreographed dances, from stylized West African to liturgical movements—even a little shimmy for the kids. MOTHER EMANUEL’s staging features a thrust set, allowing the cast to interact with audience members, who are referred to throughout the production as “Mother Emanuel”—the church body. During his opening remarks, Maharaj encouraged everyone in attendance to sing, dance, and praise the Lord at will. The musical incorporates praise breaks into the narrative—providing several well-timed jokes—and invites the audience to participate in these moments, both explicitly and structurally.

Covering 18 roles, the cast of four reenacts flashbacks for each of the fallen Nine, resulting in numerous, joyful testimonies. Going by the enthusiastic response, the audience clearly connected with the characters on a personal level.

In addition to the rousing musical performances, MOTHER EMANUEL shines due to the details that the cast provides for each member of the Emanuel Nine. Inevitably, with a cast this small, a few portrayals left stronger impressions on the narrative—like Rev. Dr. Daniel L. Simmons Jr., portrayed by Branch, who provides much laughter as he continually teases and prods Cynthia Marie Graham-Hurd, the easily exasperated bookworm, played by Sabriaya Shipley.

Those who visit New Freedom Theatre must be prepared to shed the role of spectators, temporarily becoming newly christened church members. In their new roles, the audience often joined in chorus with the cast. I even forewent my own notetaking several times to enjoy the celebration of life and music provided by MOTHER EMANUEL.

The production maintains such an abundance of hope, that when the ominous gunshots ring out and plunge the theater into darkness, the shift took me completely off guard. For several minutes, the audience sits in complete darkness, briefly hearing the final cries of these nine lives—before transitioning into a silence that speaks for itself.

This musical forced me to once again confront the violent way these men and women died in one of my sister churches. The darkness and silence created a personalized agony, heightened by the bond formed between the cast and audience-turned-church body. The production’s timing only further heightened the pain of this moment.

MOTHER EMANUEL opened on the anniversary weekends of the Emanuel Nine massacre and the Orlando Pulse shooting, and on the eve of more racial violence to come—this time for an Egyptian-Muslim teenager in Northern Virginia and an African-American mother of three in Seattle.

When the lights rise again, the actors return to deliver a direct appeal to the audience to overcome American complacency, racism, and gun violence. The cast warns, “it would be a disgrace if we allow ourselves to get comfortable again.”

Despite this somber note, MOTHER EMANUEL finds hope—even in its closure. This production finishes with a rousing rendition of “Blessed Assurance” and an Amen chorus to close the program. However, as every great Gospel celebration needs a reprise number or two, the cast marches out of the Black Box at New Freedom Theatre to “When the Saints Go Marching In.”

Overall, MOTHER EMANUEL succeeds in its mission to have audiences remember the Emanuel Nine as individuals, rather than only as victims of a collective tragedy.

Despite my initial discomfort with the premise, I came to feel at home in Maharaj’s re-conception of my sister church. The audience left the New Freedom Theatre in the same fashion as members of the A.M.E. church across the world leave each Sunday after service—humming classic hymns and moving forward with an overwhelming sense of joy.