PARROT TALK, an explorative play of metaphysical proportions written by Julius Ferraro and directed by Jack Tamburri, debuted at the beginning and was reprised at the end of April.  The month between was spent revising. This bifurcated format brought to mind The Matrix, where the medium is the message.  Here, the packaging emphasized the need for feedback to loop through time, chiseling away at creative analysis, defining plot lines of intent.  Those fortunate enough to see both renditions of PARROT TALK witnessed the distillation of creative genius. And no, that’s not a parrot joke.

It may, however, have felt like a joke when cast and crew tried to answer “What is Parrot Talk?” on their successfully funded campaign video. This proved a slippery question eliciting conflicting responses reflective of the multiple perspectives employed.  But nuances of interpretation are welcomed by Ferraro, who claims this play is about “several characters trying to define themselves in the world” and written during a period of heavy, philosophical consumption.

Hallie Martenson, our adept narrator, swiftly moves us amongst a spectrum of lustrous characters – the caged parrot, blissful married couple, sickly neighbor, elusive mind snake, and brilliant scientist – who all wrestle with Pythagoras trap-like questions.  Through a varied lens of self-reflection,  signal distortion, coded messaging and scientific rendering,  truths are magnified, analyzed, and often discarded, as each character learns what illusions to ignore and which ones to acknowledge. 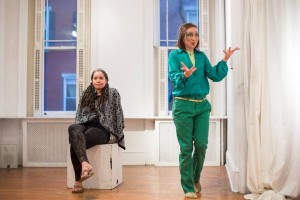 If I were really to live without illusions is the core question to our protagonist, Orlando (Christina May), the sickly neighbor’s self-discovery trip to the grocery store.  Foreshadowed by the introduced to the caged parrot (Dani Solomon) who discovers the nature of her cage, bars that confine and wings denied flight.  Raucous, the physicality of Solomon’s performance – controlled head nods, spastic twitches and squawking impersonations – enraptures the crowd which ultimately is left with a lingering parrot joke: “How many cages are out there?”  One too jarringly contemplative to be considered funny.  Soon we meet the blissfully ignorant owners of the parrot, a married couple (Hallie Martenson/ Dan Higbee) who move and speak as one singular unit. They deal only with immediate, surface-level problems like dropping a signal, or experiencing undesirable feedback.  Otherwise, their blinders are on as they happily go about their business “nam-nam-nam-ing” through Best Philly Cheesesteaks and Zaggot-rated restaurants.  The everyday chemistry of Martenson and Higbee is relatable and filled with comic relief, in nice juxtaposition to Orlandos’ well of loneliness.

Orlando collects on her way to the grocery store an unlikely friend, the mind snake (Alexandra Tatarsky) who slithers in on a pink panther like theme song.  Mind snake expertly navigates the corridors of Orlando’s mind like an old friend who has all the secret pass codes, or a mood ring reflecting the very nature of Orlando’s broodings, while easily slipping into devil’s advocate.  Tatarsky’s performance is hypnotic, surly, a tad provocative, and absolutely engaging as she challenges Orlando’s perception of reality.  While Orlando, adept at having conversations with herself, struggles to connect to anyone capable of returning her call.  May’s illumination of the raw and vulnerable aspects of solitude pulls at the fiber of our beings, both funny and harrowing.  While throughout scientific claims are made and historical data given painting inter-galactic relationships between humans, sound waves and frequencies, much of which remain to be seen by the human eye.  Making it impossible for Orlando to contain the word illusion, let alone define it.