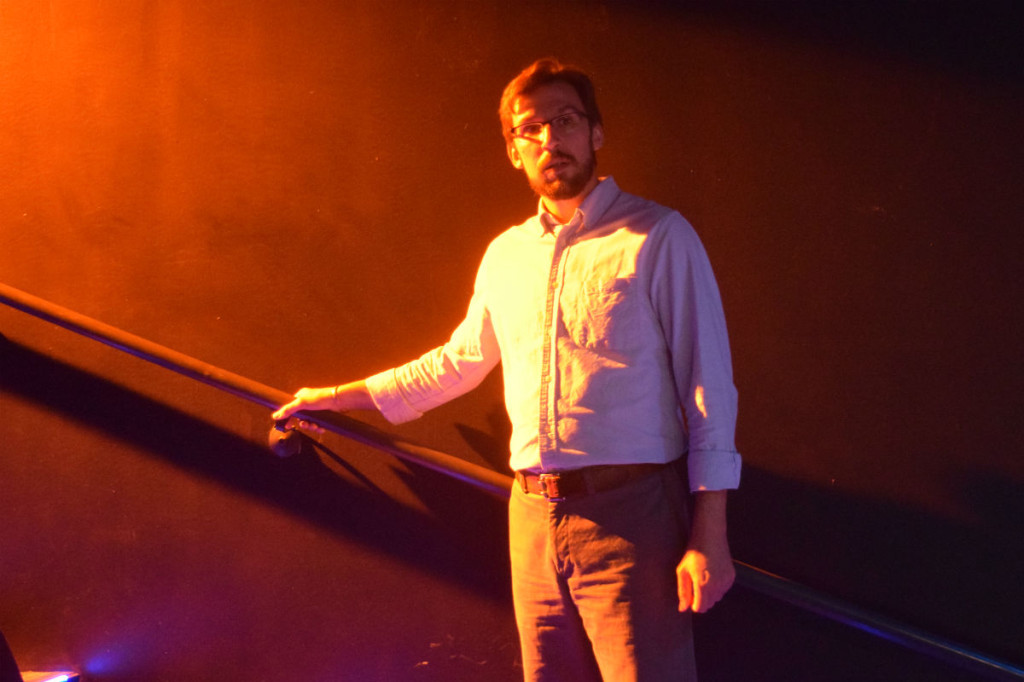 The neatly dressed, bespectacled man standing before us describes a common Rwandan tribunal: men who committed atrocities during the “Hundred Days of April” are brought to a small field to confess, in detail, exactly what they did. They are neither jailed nor executed; they are set free after they have spoken. The telling is their punishment.

“I have a story to tell,” the man says calmly, pain roiling just below the surface.

So begins Sean Christopher Lewis’ DOGS OF RWANDA, a gripping solo play that deals with loss, grief, and truth. The man speaking to us is David (Dan Hodge), and his confession takes the form of a lecture. As a sixteen-year-old kid from Ohio, David followed his high school crush to Uganda on a mission trip that happened to directly coincide with the neighboring Rwandan genocide. Years later, as an adult, he writes a bestselling book about it. One day a note arrives in his mailbox, admonishing David over the “untruths” in his version of the story. The author of the note is named God’s Blessing, and just how he and David came to know each other is revealed in achingly specific detail over the course of an hour-long monologue.

I won’t mention what those untruths are, but they are enough to prompt David to do what he swore he never would: return to Africa. Once there, he is faced with “the tourism of atrocity.” An old woman leads tours of sites where scores of Tutsis were killed, graphically recalling the slaughter; God kept her alive for this purpose, she says, as she collects tips. “I have never wanted to cry so much and didn’t,” David says, and the quiver in his voice assures you that this is certainly not an untruth.

Under Maura Krause’s precise direction, Hodge holds the audience in the palm of his hand throughout. What seems like innocuous banter can segue effortlessly into a gut punch. As we learn what David decided to reveal and what he left off the page, Hodge balances on a razor’s edge of introspection and self-loathing, his searching face bathed in Dylan Wallace’s haunted, mournful lighting. The play and the performance are both deeply unsettling, precisely because Hodge fosters such a precise level of intimacy. Easy answers are rejected here; it remains open to interpretation whether anything approaching catharsis is achieved. This is a refreshingly honest way to handle a story that centers around a perceived transgression.

DOGS OF RWANDA demands to be seen. It is a shame, then, that it has been allotted so few performances. As I am writing this, only four remain—fewer, perhaps, depending on when this is published. DOGS OF RWANDA plays at The Proscenium at The Drake when InterAct’s other show, the bloated and overpraised How to Use a Knife, is dark. That other play also touches on the Rwandan troubles, but in a cheesy and obvious way. Despite its title, it never cuts deep enough to truly unsettle its audience. But DOGS OF RWANDA is the real deal. See it if you can.