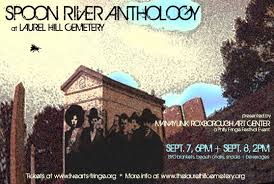 Almost one hundred years ago, Edgar Lee Masters began publishing poems from the point of view of the deceased residents of Spoon River, a lightly-fictionalized version of the small towns he grew up in. The dead of SPOON RIVER ANTHOLOGY no longer worry about how they appear to their neighbors, and this grants them a power to re-form themselves into better, more genuine selves.

The same can be said of the cast, made up of mostly non-actors (the majority are local poets). The costumes come straight from the actors’ own closets and the accents are all over the map, but none of that really matters here, because the performances glow with a warm openness. According to director Patti Allis Mengers, each actor chose which of Masters’ poems to read, based on which speak to them personally. That’s likely the reason why, although the performances are sometimes overly showy, they never feel like recitations. [Laurel Hill Cemetery] September 7-8, 2013. fringearts.ticketleap.com/spoon-river-anthology.