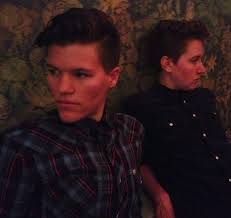 GAYZE: A REAL LIVE WEBSERIES is rough around the edges, without a doubt. The cast aims for the cartoonish a lot of the time, and the show lays on rather thick slices of pop culture (they play TV theme songs pretty often—there’s even an extended laugh track for a bit). Once the show really gets rolling, though, the joke callbacks begin to stack up, and what at first seemed like throwaway jokes turn out to be integral to the plot.

And boy oh boi, is there ever a plot! I won’t reveal any surprises, except to say that it’s complicated, and that everything comes together hilariously in the end. The tech side needs a little work (an amp that wouldn’t stop buzzing, and some piercingly loud sound cues), but that can’t distract from the entertaining pastiche on stage. The members of the cast play multiple roles that are mostly differentiated well. Kellie Cooper was particularly good as a dimbulb named Special, and Jenn Kidwell was fantastic throughout. The show finishes with a super-satisfying conclusion that also somehow brings us back to where we started. In a nutshell, if you liked The Monkees but wished it were written by Larry David and featured more thrown dildos, then this is a show for you. [Tabu Lounge and Sports Bar] September 6-8, 2013. fringearts.ticketleap.com/gayze-a-real-live-webseries.