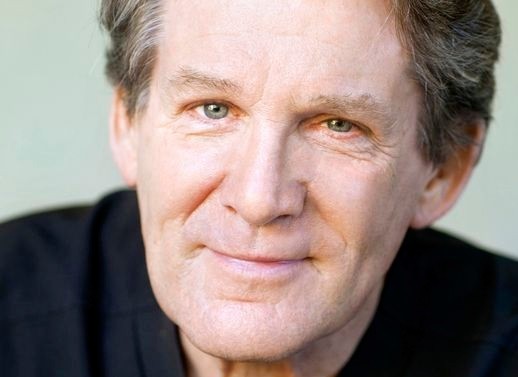 The name Anthony Heald may not be immediately familiar, but most people will certainly recognize this venerable character actor’s face. Perhaps you know Heald from his role as Dr. Fredrick Chilton, one of Hannibal Lector’s many adversaries, in The Silence of the Lambs. Or maybe you watched him as Scott Guber, the beleaguered assistant principal who presided over David E. Kelley’s Boston Public for four seasons. Heald’s 40-year screen career spans more than sixty film and television appearances, often in small but memorable supporting roles.

Heald’s most consistent home, however, has been the stage. The actor has seven Broadway credits to his name—he most recently appeared opposite Bradley Cooper in the 2014 revival of The Elephant Man—and has been nominated for two Tony Awards (for Anything Goes and Love! Valour! Compassion!). His Off-Broadway credits include Larry Shue’s The Foreigner (for which he netted an Obie Award) and the world premieres of Terrence McNally’s The Lisbon Traviata and Lips Together, Teeth Apart. A longtime resident of Ashland, Oregon, Heald has logged ten seasons with the renowned Oregon Shakespeare Festival, where his roles have included Shylock in The Merchant of Venice, Iago in Othello, Doolittle in My Fair Lady, and the title role in Tartuffe.

After graduating from Michigan State University in 1971, Heald began his stage career at Lansing’s legendary BoarsHead Theater. It was there that he first met Michigan native Mary Martello, who was at the start of her own journey as a performer. Forty-odd years later, Martello is one of Philadelphia’s most respected resident actors, about to take on the mother of all musical theatre roles: Mama Rose in Stephen Sondheim and Jule Styne’s GYPSY. In a casting coup, Heald has come to Philadelphia to play Herbie, Mama Rose’s long-suffering boyfriend.

“I learned a lot about my craft from watching and working with Tony,” Martello told me in an email. “He was a foundation of my becoming an actor as I moved from apprentice, to intern, to company member [at BoarsHead Theater]. It is so joyous to be working with him now! I cannot imagine taking this journey as Rose without him as Herbie.”

I recently spoke with Heald on a break from rehearsals for GYPSY, which begins previews at the Arden Theatre in Old City on May 18. These are edited excerpts.

Cameron Kelsall: Is this your first time performing in Philadelphia theater?

Anthony Heald: It is. I married a Philadelphia girl 32 years ago, so I have spent a lot of time in Philadelphia. It’s one of my very favorite cities, and my father-in-law lives right near Rittenhouse Square, so that’s where I stay when I’m hear. I’ve walked through Philadelphia many times fantasizing that I was walking to or from a theater where I was working, so it’s nice to finally be doing it, and especially at the Arden.

CK: How did the job come about?

AH: I would usually be working at the Oregon Shakespeare Festival, which is my home theater, but I had the time free this year. My father-in-law is turning 99 later this month, and I wanted to spend some time with him. I thought to myself, “it would be great if I could find a job here!” So I called some old friends, and eventually spoke with Mary Martello, who I worked with 40 years ago in Michigan. She said she was doing GYPSY and that they were looking for a Herbie. I came out and auditioned, and God smiled.

CK: How does it feel to be working with Mary again after all this time?

AH: I don’t think we change. We’re like trees: we are who we are, and we just add annual rings. I look into Mary’s eyes, and 40 years just melt away. She’s still the same lovely person and wonderful actor she was then, but she’s gained 40 years of life and experience. She’s just at the peak of her game. Several years ago, I came and saw her do Arsenic and Old Lace at Walnut Street Theatre, the first time I’d seen her in decades, and I was just blown away. I dream of doing Long Day’s Journey Into Night with Mary. [Author’s note: If any artistic directors happen to be reading this interview, MAKE THIS HAPPEN.]

CK: You’ve had success in film and television, but it really seems that theater is your home. What keeps you coming back to it?

AH: I am an actor largely because I love solving puzzles. I became Jewish because I loved studying Torah, studying text. I love delving into it and finding meaning, finding connections. That’s what I love about being an actor, too. You try to take this transcript of conversations between imaginary people and embed it in human behavior that helps tell the story. When you’re working in front of camera, you have very little time to create that. Largely it is created by the cinematographer and the editor, and you’re just there to provide them with images.

On stage, you get the chance to rehearse it time after time—building, exploring, eliminating, expanding. And then you get the joy of performing it, finding out performance after performance what new colors you achieve. I cannot tell you how many times I would be driving home from a studio after getting a couple of scenes in the can, thinking about a difficult moment, and suddenly think I had it! But it’s done. You can’t go back.

Also, when you’re working in front of the camera, what you’re mostly seeing is the camera. It’s just a looming presence. When you’re on stage, all you see is your scene partner. I love that.

CK: So many great actors have played the role of Herbie over the years. What do you think attracts actors to this part?

AH: Herbie is actually quite a large part. He doesn’t have the great solos, but it’s a great part all the same. And what makes GYPSY so extraordinary is that it’s a play. Arthur Laurents wrote a play that totally holds up. The writing is so intricate and so carefully crafted. Every element takes off, and nothing is artificial. And miraculously, the music grows out of that. Every song advances the story or exposes character—nothing is ornamental. At base, it is a very intimate story about a small family and their struggles. And I think there are two important relationships it explores: the mother-daughter relationship [between Mama Rose and Louise] and the relationship between Rose and Herbie. Frankly, too: Herbie is what we call in Yiddish a mensch. I so often play sleazeballs in suits, and it is very nice to play a character who is such a good man.

CK: You mentioned earlier that you are a regular at the Oregon Shakespeare Festival. How did you end up living and working in Oregon?

AH: I’ve done eleven seasons there. Many years ago, we were living in suburban New Jersey. I was working on stage in New York, doing film and television here and there, and there was just such a separation between where we lived and where I worked. I had an hour-and-a-half commute to get to work, I couldn’t get home between shows, and I don’t like New York City very much. I have a very close friend who is a stage manager out in Ashland, Oregon, so I went out to visit and just fell in love with the place. Then I thought: we could raise our kids in this beautiful small town, which happens to have the largest theater in the country. I could walk to work in ten minutes. I could be home for lunch. And it proved to be everything I could have hoped. And a couple years ago, Bill Rauch took over [as artistic director] and completely blew the roof off whatever expectations for what that theater could be. The fact that [Lynn Nottage’s] Sweat—which the theater commissioned—just won the Pulitzer and is up for a Tony, and a few years ago there was so much success for [Robert Schenkkan’s] All the Way, shows all the great work that’s coming out of Ashland. It’s just an ideal place to work.

CK: You did come back to New York and London with The Elephant Man a couple years ago. How did that come into your life?

AH: That production was a remount of something done by Williamstown Theatre Festival. I got an inquiry from my agent because the production was losing Shuler Hensley, who was going to play the Grinch at Madison Square Garden instead. I love the play—I had seen the original production back in 1979—and I think Bradley Cooper is just extraordinary, and Alessandro [Nivola] is extraordinary, and I’ve known Patty [Patricia Clarkson] for many years. I was very anxious to do the project, and it was way beyond what I ever hoped it would be—especially taking it to London. And I have to say that Bradley Cooper is such a wonderful man. I played Lear at Cal Shakes right after London, and Bradley flew out from New York to come see a performance. I can’t emphasize enough what an amazing person he is, and a thrilling actor to work with.

CK: So, GYPSY runs at the Arden through June 18. What’s next for you after the show closes?

AH: My wife and our 30-year-old son and 25-year-old daughter are going to fly up to Anchorage, and then drive to Denali National Park to spend a week hiking in the tundra. Professionally, I don’t know what’s next. I’m available!

One Reply to “Anthony Heald in GYPSY: Journeyman actor makes his way to Philadelphia”