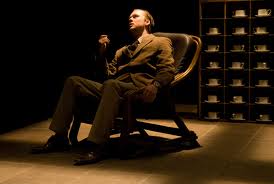 Let’s be real: Most theater we see these days is at least a little bit pretentious. The very nature of theater is based in pretense. We are asked to believe that the flesh-and-blood human beings performing before us are kings and queens and cowboys and chamber maids. Audiences pride themselves on taking part in the public exhibition of high art (whether the pieces we watch actually achieve high art is a different matter). THE SOCIETY is a blast not only because of its unself-conscious goofiness but also because it is about pretense. It takes our highfalutin attitudes toward culture and boils them down into delightful satire.

A used teabag can ignite a revolution when your culture is built entirely around coffee. The three characters in THE SOCIETY speak in mock French—not an actual language, but just transparent enough to be both understandable and hilarious. Something’s rotten in the state of Coffeeland when three smartly-dressed aristocrats—who seem to do nothing but sit around, drinking, talking and even dancing about coffee—start noticing some changes. Someone has been drinking tea(!); there’s a portrait of Chairman Mao in a drawer; someone suddenly knows Kung Fu. These cultural violations start poking holes in the coffee-based fabric of this Francophone society and ultimately wreak havoc on everything our sophisticated heroes know of existence. An hilarious skewering of contemporary xenophobia, THE SOCIETY examines the damage done when we cling too firmly to our pretenses. [Painted Bride Art Center] September 6-8. fringearts.ticketleap.com/the-society

Read another Phindie Fringe review of THE SOCIETY