It’s 1983 in the UK. Margaret Thatcher is in power, the me-first era is in full force, and a group of affluent friends gathers for an evening of polite debauchery. Like all best laid plans, it doesn’t take long for the charade to unravel. This is Marc Camoletti’s HAPPY BIRTHDAY, as adapted by Beverly Cross. Trey Lyford direction for 1812 Productions opens tomorrow, May 3. 1812’s Tyler Melchior talked to him about the play and this production. [Plays & Players Theatre, 1714 Delancey Street] April 27-May 21, 2017; 1812productions.org 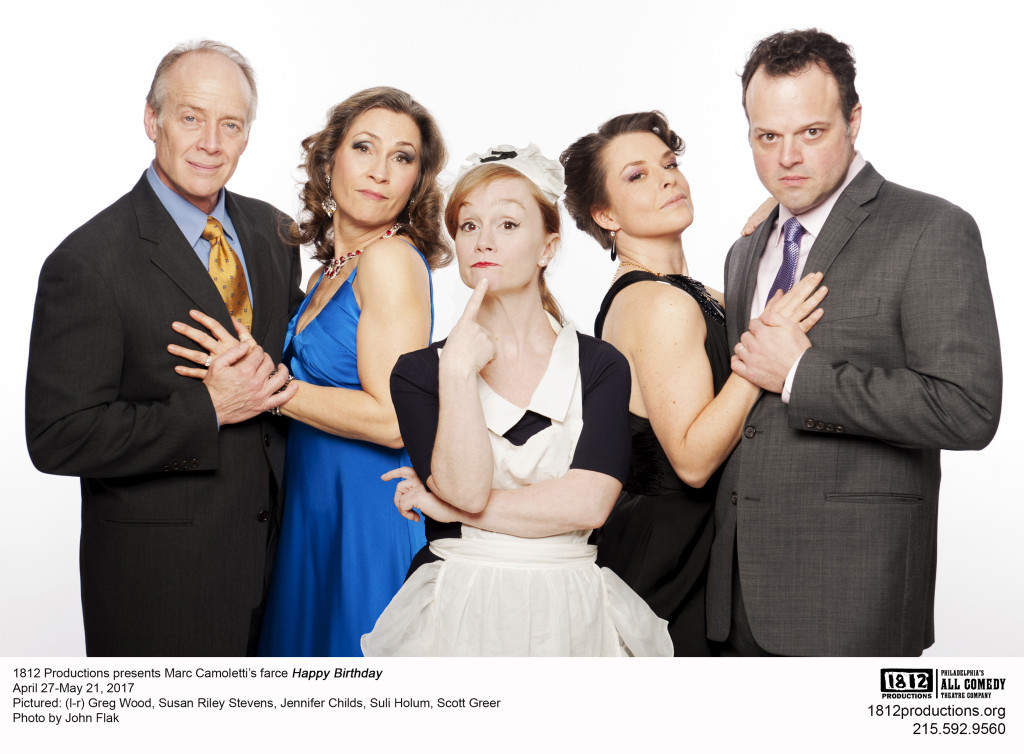 Tyler Melchior: This is your first time directing for 1812. What appealed to you about HAPPY BIRTHDAY?

Trey Lyford: First and foremost for me was the cast that we have.  When Jen asked me on board and we settled on the casting—Greg Wood, Susie Stevens, Scott Greer, Suli Holum, and Jen Childs— I was just thrilled to be in the room with these people.

So the real appeal was who I get to work with. But as far as the play goes, I think it really comes down to whether or not something will be fun to work on.  Happy Birthday has all kinds of turns and surprises that I think the world needs right now.  I also think there is something about watching people live dangerously.  So often we take such care in our lives and sometimes it’s fun to see someone just go for it.

Tyler: Does working with your wife (Suli Holum) on a play about infidelity make for interesting conversations at the dinner table? Plus getting in the room with two other amazing theatre couples, Greg & Susie and Jen & Scott.

Trey: Well this won’t be the first play I’ve done with my wife. In fact we did Othello together (the mother of all infidelity plays).  I played Iago and she was Desdemona, but still . . . jealousy and lust was in the air.  I think the fun thing about doing this kind of play with three married couples is that we will have such short hand with each other as well as a real safety and respect in the room.  I think one of the key things that makes a comic play about marriage and infidelity work is a real understanding of what the stakes are.  It is the truth of the danger that allows for the honesty in the comedy.  Without that you really don’t have much.

But with the ferocity of Jen and Scott and the depth of Susie and Greg, I’d have to REALLY screw up to make this not work.  When I got the job I thought, well, my main task will be to stay out of the way.  Then the second is to make sure I make a room where these pros can really play and find a show that they can enjoy.  I don’t think we’ll have much trouble there.

Tyler: In addition to each character’s hidden agenda, economics plays a huge part in the comedy of this play, from both ends of the spectrum. What’s your take on that?

Trey: I think that the tension between the rich and working class is definitely an important element to the comedy of this work.  It feels very French to me.  The bourgeois live a life of freedom and excess while the workers make it all possible.  But in the end, the show allows us to see inside that kind of life.  Yes, in the show they get away with certain things but the audience gets the last laugh.  I think that kind of moral higher ground that the audience gets to be a part of is incredibly liberating.

Tyler: Camoletti’s work had a difficult time getting traction in America during his life, despite success in England and France, and didn’t really begin to enjoy success until the 2008 revival of Boeing Boeing. There are also multiple iterations of his plays that, if I understand the history, were created to appeal to different audiences, including three different iterations of HAPPY BIRTHDAY (Lantern Theater Company is doing another version of it called Don’t Dress for Dinner next season). What do you think the appeal is of Camoletti’s work to an American audience now— something there now that wasn’t felt when the work began to come to America 50 years ago?

Trey: I think this speaks to your earlier question about economics.  I think for such a long time we prided ourselves on “all men are created equal”.  The comedic tension of the class system didn’t really play in our daily lives, even though it certainly existed behind closed doors.  So much of laughter comes from the release of tension.  There is an opening that occurs that allows all of our frustrations out in a laugh.  In England and France, the struggle between the working class and the elites with country homes was significant and a huge part of their history.  In our current economy and political landscape Americans are starting to feel more and more what the discrepancy between rich and poor is about.  Certainly it’s always existed, but it’s really in focus at the moment. And because of that, there has been a tightening.  I mean, look at how SNL’s parodies are starting to really pop and resonate for people on the left.  It is tension and release.  I also think something that is really relevant to our times is the way in which facts don’t seem real.  In Happy Birthday everyone is following their own truths— and their perspectives and needs define what they believe to be true.  This couldn’t resonate more with today’s audiences.

Tyler: Why set this play in the 1980s? What is it about that time that works so well for this story?

Trey: Well first of all, the English version of the play was written in 1980, so that was our first hint on the time period. But then as I began to think about trying to create the world of this play I couldn’t help but think of the music, fashion, and passion of the ’80s.  I grew up then and just love the bright colors and up beat music.  It seemed a perfect fit . . . except that it happens in an English country home.  I then thought about all of the fancy country homes that have begun to get renovated in the Catskills and other areas around large cities.  Places that are celebrated for their nature but are then transformed by the city folks that come up to vacation.  Old diners are being transformed into ironic versions of themselves and the general store is now a boutique consignment shop with hand-made wallets.  So I imagined, along with our design team, what it would be like to have a country home for city elites.

Tyler: And the money!

Trey: Exactly! The 1980’s was a time of great affluence and self-satisfaction.  People made money and spent money mostly on themselves.  Success was visible and flaunted.  Now selfies and Youtube videos of people opening their mail has become the norm.  There are a lot of parallels for me between then and now.

Trey: We kept the play set in the UK primarily because the language was so British.  It is full of rich comic phrases and exclamations that you would only hear in the UK. Also there is so much in the play that refers to the status of the characters.  The maid vs the lady of the house for instance.  The “upstairs/downstairs” quality of the comedy is present throughout British comedy so that interplay between servant and bourgeois just seems more at home in England.

Tyler: And the maid, Brigit (Jen Childs), is the definitely the audience’s way into the play. She’s so much fun and, even in moments when she has no idea what’s happening around her, she still “gets it.” Would you agree with that statement or is that an oversimplification? Is there something of each character that opens the door for the audience?

Trey: In the classic Commedia structures that these farces are based on, the servant is often the one we connect with.  As Arlecchino gets caught in a tricky situation, we feel for his troubles and his ability to profit from the idiocy of his masters.  So yes, I would agree.  The maid really is our eye in, the person who lives on the outside of the chaos as both a witness and a beneficiary of the plot’s comedic machinations.  In fact there are even a few lines that feel like direct address.  We even tried that out, but in the end the 4th wall prevailed!

That said, we also feel for the others as well.  I think we love to see Robert (Scott Greer) squirm and we enjoy seeing the sneaky provocations of the other Brigit (Suli Holum).  She is the one who really turns up the heat.  The hosts of the evening, Jacqueline and Bernard (Susie Stevens and Greg Wood) provide us the structure and delineate which boundaries to cross.  So depending on who you feel yourself to be like, there are certainly many different ways in. There’s a character for everyone.

Tyler: You have long history of devised work and performed the second incarnation of your original piece all wear bowlers with Geoff Sobelle at 1812 back in 2005. I remember you telling me about part of the process for making all wear bowlers was getting together with Geoff and just playing until certain things stuck—I’m totally paraphrasing you here. Is there something of that style of work that you bring to scripted pieces or is it a different world?

Trey: They really are completely different animals!  Just the fact that you have a road map to begin with in the script is such a load off of the process.  You know where you are going.  When I first saw the rehearsal schedule I was a little worried because three weeks seems like barely enough time to know your opinion on something much less have an entire production but these actors made it easy!  I think the one thing that devising has taught me, that I really trusted in for this process, was how vital the audience is to the work.

Tyler: Yes, absolutely. We talk about that often, how their laughter completes the rhythm of the play.

Trey: That’s why I was so excited for previews, because it was then that I could really start to see what we had made together.  And I kept saying that in rehearsal, that the audience really would be the final component. But in order to do that you need to trust that it’s okay to not have all the answers.  That is something I have become very comfortable with.  When you are devising you spend most of your time not knowing.  I hope I was able to give that ease and comfort with that to the company.  It leaves more room for play and discovery.

Tyler: What do you want the audience to take from HAPPY BIRTHDAY? What do you get from it?

Trey: Just a darn break! We’ve had a rough couple of years and I think it’s so important to have a bit of laughter, joy and release in the world.  I have many favorite moments in the show. The scene that sticks out to me is the confessions—which don’t really answer anything and turn out to be just another plot twist!  When Robert is begging for forgiveness and the room is tense with revelations and betrayal. Brigit the maid just sits in the back, curlers in her hair, and she just keeps commenting on the situation.  The whole company there just cracks me up!

Just when things get to their most serious point, that’s where the comedy can really have a ball.