J.T. Rogers’s much talked-about drama OSLO makes visible the secret negotiations—between determined Norwegian diplomats and political hawks and doves from Israel and Palestine—that led to the Oslo Peace Accords. It was workshopped at Philadelphia’s PlayPenn conference, one of America’s most important and intensive play development conferences, and began previews on Broadway at the Lincoln Center Theater, March 23, 2017.

In this second of a two-part interview (read part one), Henrik Eger talks to Rogers about his play and its development.

Henrik Eger: If there were moments when your play moved into a different direction than you had anticipated, how did you handle feedback and any possible misunderstandings?

J.T. Rogers: Watching the second reading at PlayPenn, I realized, “At least half of act three has to go. The climax of the play is earlier than you thought. After that, you get less than 10 pages till ‘curtain.’ Get the red pen, Rogers.”

Henrik Eger: What do you think your main characters would say about being looked over and reviewed extensively by theater experts at the PlayPenn conference?

J.T. Rogers: The main characters in my play, Oslo, are a young, dashing Norwegian couple named Mona Juul and Terje Rød-Larsen. Mona would be reserved, cards held close to her chest, cannily watching those who watch her, waiting to see what they were seeing before she engaged with them. Terje would wrap the lot of them up in his arms, pour everyone enormous vodka martinis, and press the flesh in the very best Bill Clinton style.

Larsen has since seen the play in NYC, and told me personally that he was very pleased. Juul will see it when it transfers to Broadway.

Henrik Eger: While the serious workshop work might have been stressful at times, were there funny, perhaps even hilarious, moments?

J.T. Rogers: We got done with our final rehearsal before our first public reading at exactly the second we had to stop—all of us shaking and charged from racing as deep into the play as we could, so we could have as much covered as we could before sharing it with the audience. Then we collectively looked at the script, realizing we had only been able to rehearse 40 pages—out of 140. The room burst into giddy laughter. “Fuck it! We’ll just wing the rest of it, right?”

Henrik Eger: As a PlayPenn playwright, how has your participation in this intensive workshop series changed the way you might handle challenging situations differently in the future?

J.T. Rogers: This workshop couldn’t have come at a better time for me as a writer. Playwrights—any writer, at any stage in their careers—are constantly dealing with rejection and self-doubt. The best way to ward off these “blue devils” is to be given the gift of total immersion, with a strict deadline at the end. Three weeks of structured time when I was to do nothing but write this one play, while knowing people were waiting to hear and see it when I got through the tunnel? I mean, come on! Your muscles and your mind are firing as one, not just during, but for long after those three weeks are over. 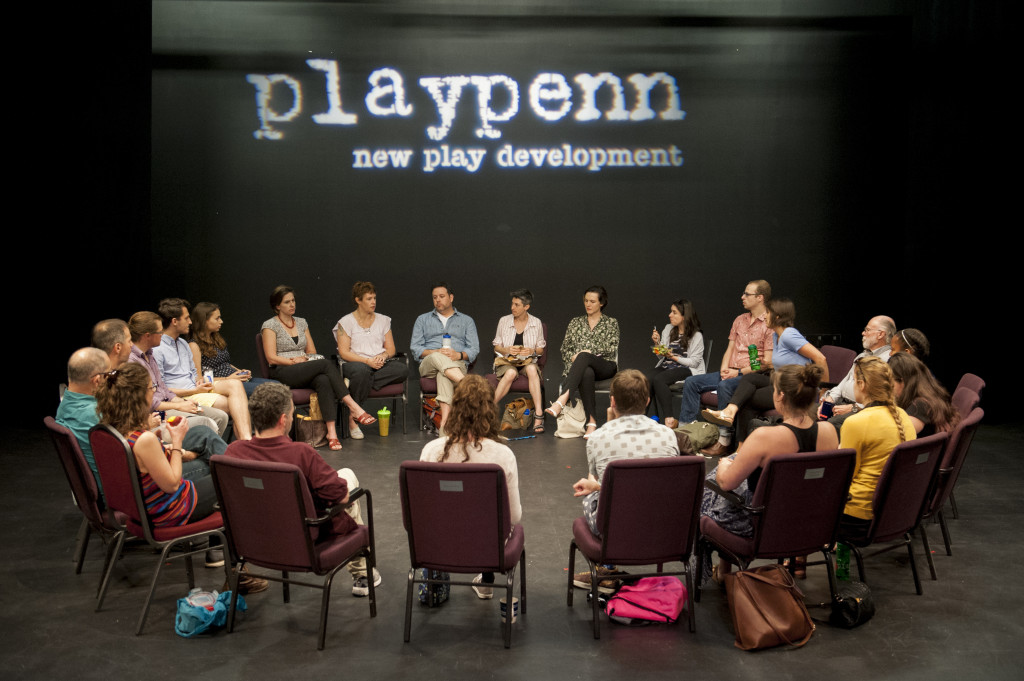 Henrik Eger: Since 2005, PlayPenn has helped bring about 100 plays to a state they cautiously call “closer to production-readiness.” How close do you consider your play to be to that state? And what are the next steps you have taken to get it produced?

J.T. Rogers: I was very fortunate with Oslo in that LCT [Lincoln Center Theater, NYC] had (unofficially) committed to it before I arrived at PlayPenn. So my focus was to get the play ready for a production with a set date, rather than work on a play with the hopes of it one day getting a production.

Henrik Eger: What has become of your work overall as a playwright since the PlayPenn conference?

J.T. Rogers: Plans are in the works for an earlier play of mine to have a revival in NYC. I’ve also started research for a new play—long way to go, but promising.

Henrik Eger: Where do you see yourself now in this process of becoming an even stronger playwright than before?

J.T. Rogers: I think the biggest change is that I understand how to use the tools of my profession better. I am a much better craftsman than I was when I started out. And more and more and more, I believe that if we write and write and write, when we take care of the craft, the art takes care of itself. As Arthur Miller once put it, “It’s not spelled ‘playwright” like “boatwright” [boat builder] for nothing.”

Henrik Eger: What have you discovered about yourself through the PlayPenn process—not only as a playwright, but as a mensch?

J.T. Rogers: I don’t step out of my own skin much and look back at “me,” as I don’t find “me” to be that interesting. I live with “me” every second I’m not writing, so isn’t it nice to be able to be someone else who’s not “me” when I am writing?

But years ago my brother sent me a letter from rural North Ghana where he was living in a village studying fiddle music. In it he wrote, “Our job is to create the greatest possible expression of ourselves as human beings before we die.”

I’d add many other things now to a Grand Statement about an artist’s life and work, but that line—with its mixture of ego and humility—has stayed with me. I kept thinking of it as I worked at PlayPenn. Each time, I’d shake my head and smile.

Henrik Eger: What advice do you have for the next generation of playwrights?

J.T. Rogers: The American theater is chock full of inward looking plays that fester over small, personal family dramas (and an “avant-garde” take on this theme is just a new dress on an old horse), which exist as if they have no connection to the larger, more complex world we all actually live in.