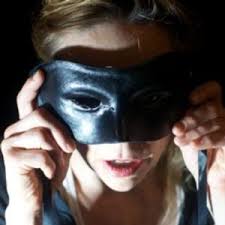 Walking Fish Theatre has won accolades (including a 2010 Barrymore) for its programs in education and children’s theater. But Ari Flamingo’s THE SAFE WORD IS BEGONIA is certainly not for kids. 1950s house-fiancee Dolly (Mauri Walton) breaks things off when her conservative husband-to-be Howard (Bernard Glincosky) suggests there’s nothing wrong with a little heavy-handed discipline in a marriage (“If you want to correct me there will be no wedding”). But she reconsiders when she finds an illicit magazine which throws a new perspective on Howard’s opinions (“First I was offended … then I got to the part where she was hitting him.”) With the help of librarian Patsy (Michelle Pauls) and the magazine’s publisher (Dennis Smeltzer), Dolly begins to understand what might be driving her man.