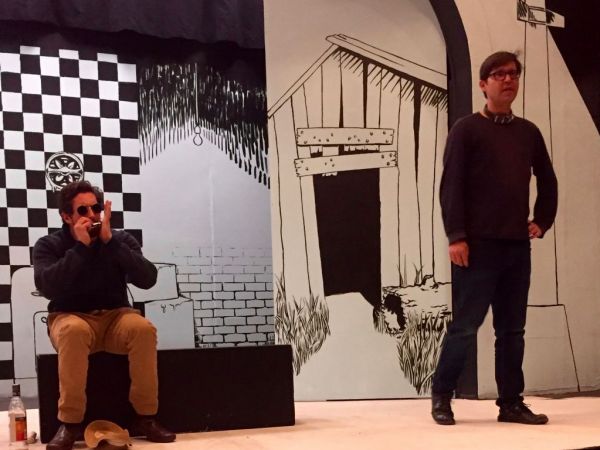 From the author of such children’s classics as The Giving Tree and Where the Sidewalk Ends comes a socially insightful series of vignettes: some raunchy, some violent, all hilarious. The mind that created the twisted poems and drawings, indelible to our youth, shines brilliantly on the adult world and all its absurdity, and the people at Allens Lane revel in it.

Mariangela Saavedra directs a solid cast that transitions frequently and totally into different characters. Jim Broyles’s anti-hippie police man turns into a lovable mutt with a sweep of hair gel and a change of facial expression. Patrick Cathcart uses accents to switch from blind street musician to Russian laundry man. Mark Grayson is a whiny middle class husband and then the hippie responsible for such phrases as “far out” and “Paul lives”

The first vignette (with Susan Mattson and Grayson)  is a bit slow, uncomfortably decrying “bag ladies”, but turns into a proto-feminist outburst.  And once Cathcart and Teresa Nutter start rattling off all the names for female and male private parts in the short “Bus Stop”, it becomes obvious that this will be a smart and silly evening. These two also feature in the brilliant “Thinking Up a New Name for the Act”.  In the opposite spirit of the prior verbose sketch, the entire ten minute piece uses only the words “meat and potatoes”, yet spirals out into a drama complete with murder and a courtroom confession (“Meat! Meat! Meat!”).

There’s some serious rhyming fun in the prostitution scene “Buy One, Get One Free”. Music director Eric Gershenow turns it into a slinky showtune, giving the hookers (Stephanie C Kernisan and Adrienne Cascarella) the slow sexy part, and speeding up and squaring the uptight customer’s (Broyles) responses. Kernisan owns the scene and the audience with her character’s bawdy moves, sultry voice, and sense of humor.

The real life father-daughter duo Thomas and Lia Taylor light up the darkly funny  “The Best Daddy”. Dad confesses he shot the pony he bought for his daughter’s birthday. When she questions incredulously, voice cracking, “YOU SHOT MY BIRTHDAY PONY?!?!”, he points out it wasn’t really hers yet because he didn’t have a chance to give it to her. Silverstein flips or idea of truth upside down in this in other sketches, by offering a scene and then providing context. Dad didn’t really kill the pony , he just wanted to psych his daughter up for the scooter he got her. The laundry man wasn’t trying to scam his client (“Watch and dry, not wash and dry. Read the fine print”). He was trying to teach her a valuable lesson, just like the cable company taught him.

Despite all the adult content, the vibe feels like a fun family affair. The director and music director are married. There are three people from the same family involved in the play.  Allens Lane is a BYOP (picnic) so the audience sits at tables together drinking wine and eating cheese. Actors wander to the stage chatting with the audience. Gershenow and E.J. Simpson play volume appropriate funky music.  And Shel Silverstein’s genius unlocks the strictures of adulthood and allows our inner child to laugh out loud at our ridiculous grown-up world.