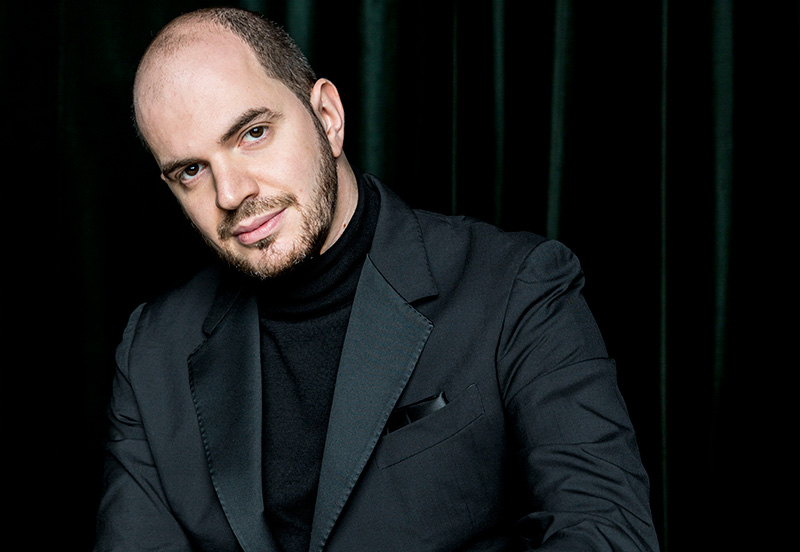 Kirill Gerstein bathed his Princeton audience in splendor Monday, February 27, when the pianist presented a recital featuring Bach, Brahms, Beethoven and Liszt at the McCarter Theatre.  Nothing about this evening was perfunctory. Everything on the program was beautifully and emotionally charged, lifting the audience to ever higher levels of experience. The evening was, simply put, brilliant.

A talk by Scott Burnham, professor of music at Princeton University, began the evening. Dr. Burnham gave a warm and engaging account of the music to be played, using recorded musical examples from his laptop to illustrate many of his statements. He provided insights into the evening’s program that definitely enhanced the casual listener’s experience. For example, he spoke of the multiple excitements inherent in the evening’s program: of how the young Brahms visited the middle-aged Liszt, who played tonight’s Second Sonata, but also gave copious suggestions to the young Brahms (which we easily heard when performed); how Bach called these works duets because he considered his counterpoint to be two voices; and how Liszt was perhaps the finest pianist of the 19th century.  Paul Sciavo wrote the entertaining and perspicacious program notes which were also a fount of information to further our listening pleasure.

The Bach was from the very outset, sparkling, assured, and magnificently rendered. We were in Pythagorean heaven. To many ears, this was exciting, meaty renditions of works which could easily be dismissed as minor. The Brahms sonata followed. This is the best way to describe its effect:

Instantly, we were awakened into a place of supremely heightened consciousness. We were in the Arctic, surrounded by polar bears. The aurora borealis glistened in the sky. We gamboled among the coruscating lights. We were then catapulted back to earth where we witnessed ice sheaths calving into the frigid wastes. Then we awoke.

The sonata ended with us feeling spent and totally satisfied. Astonishing artistry on every level was displayed by Mr. Gerstein. Polite applause followed this miraculous event. Many left the auditorium to have tea and a cupcake while others needed the time to recover their senses.

Upon our return, we were gifted with a Beethoven sonata, the curious, quirky number thirteen. Again, astonishment and wonder seized us by the throat with a thousand lips. Immediately afterwards, came sonata fourteen, the “moonlight” sonata, so well-known by its famous theme. Here, it was given a measured beginning, evolving into a volcano of sound. Absolutely wonderful. The audience now appeared to be aroused by this magnificent artist, and loud acclaim filled the hall only to have Mr. Gerstein rush out again to launch into Liszt. Sensation ceased since we were all now disembodied, our souls having left our bodies to float in the air. To use the popular argot of the trendy, it was awesome.

Mr. Gerstein was given his proper due by an audience now fully aroused by the magnificence of his artistry. There was an encore, Liszt’s EroicaEtude.

Leaving the venue, one could see Orion straddling the McCarter in the sky. It was not too farfetched to think that we, too, were divinely touched by this amazing experience. Thanks to Mr. Gerstein, we glimpsed immortality.