Automatic Arts bills its NICE AND FRESH series as “Pop Up Performances of New Theater, Dance, and Circus Arts”. Last weekend Moving Arts studio in Mount Airy witnessed a gathering of acrobats, a comedian, and dancers—different artists connecting subjects to their own artistic voices. They transform the space, progressively adding to the mood. 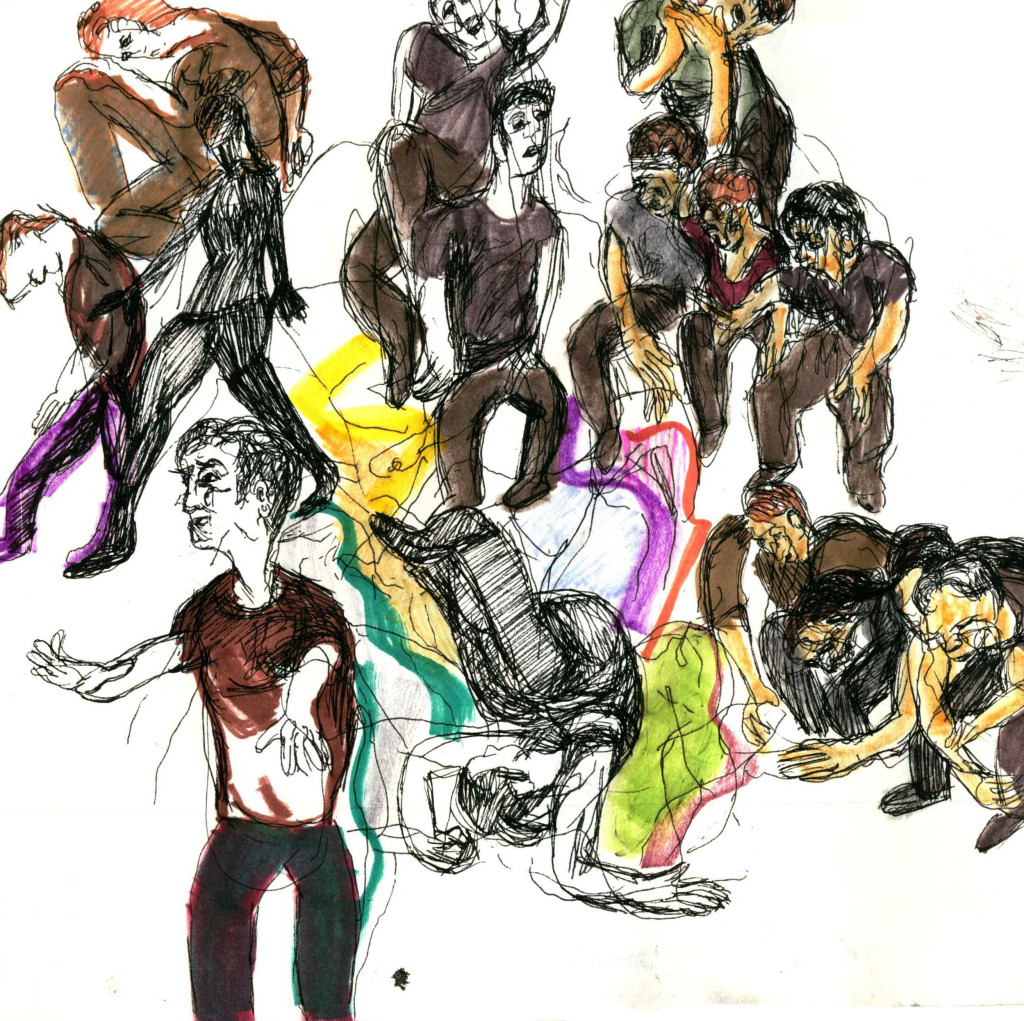 The host Sara Knittel introduces herself with this ridiculousness that is unmistakably funny. This quickly turned into an interaction among different artists showing serious consideration for technique. Almanac Dance Circus Theatre consisted of a large group of performers. The complexity in their act starts the show off on a serious note.

“A Door in the Desert” (sketched above) by Joseph Ahmed, Emmanuel Becerra, Ben Grinberg, and Evelyn Langley, Robin Stamy (Almanac Dance Circus Theatre) started slow and grew more complicated as it progressed. Intertwining arms and legs in the beginning gave birth to various relationships. The balance and fortress of one or two persons invokes nuances of personal boundaries and diversity in the group. The dialogue of foreign language is another layer of communication that went along with the movement across the room. “A Door In the Desert” is using the space well, and is followed by a folky atmosphere in the next piece. 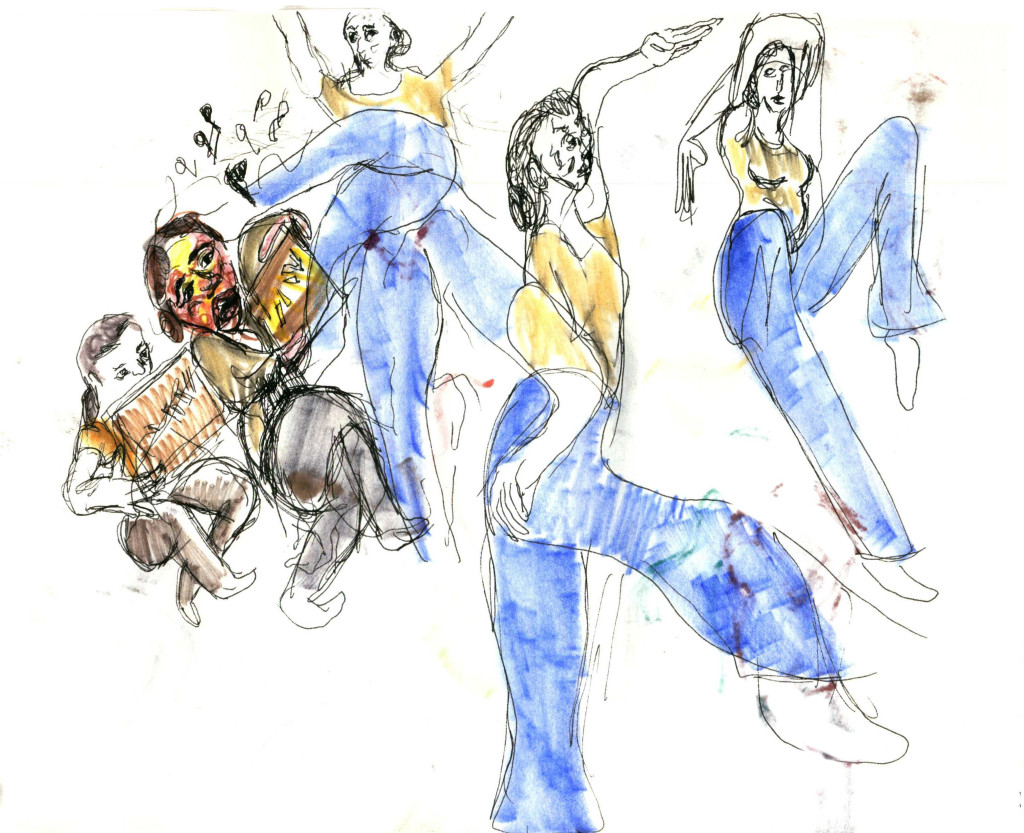 In of soft fissures and jagged spine (KC Chun-Manning and Camilla Dely) one of the dancers is playing an autoharp or zither. This made it feel like more or less like an open market at a festival. The dancers mimicked each other and shared a common rhythm. The music from the instrument creates an air for dance to manipulate the sound and space. The zither transports us to a mystic performance. 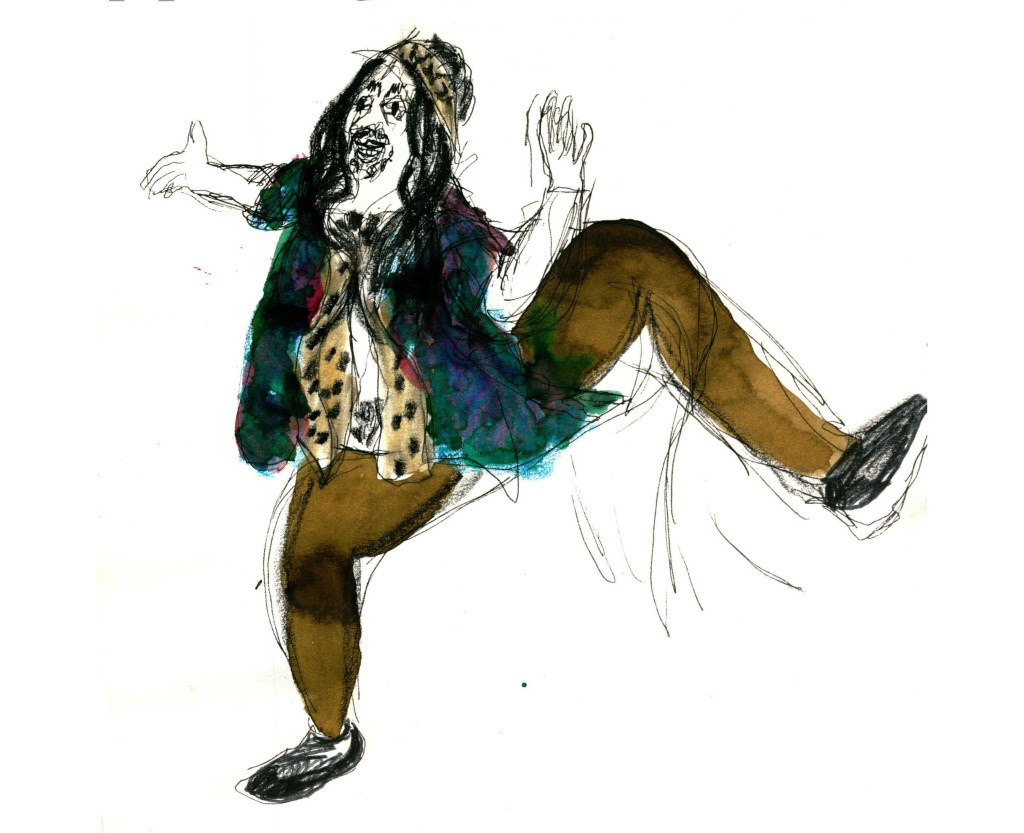 The Joseph Davenport Experience (Sarah Knittel, sketched in the two pieces above) brought a sense of humor to the stage. Joseph Davenport is interacting with the audience to lighten the mood. Davenport’s philosophy is, “fuck fear,” and commits to showing us how to kill fear. This is a strange character like that of Captain Jack Sparrow with a mix of amusing British humor. Since this Joseph Davenport character comes back in the last act it is a pattern in that it transitions from one performance to the next in negative or positive light. Betty Smithsonian accompanies on guitar. 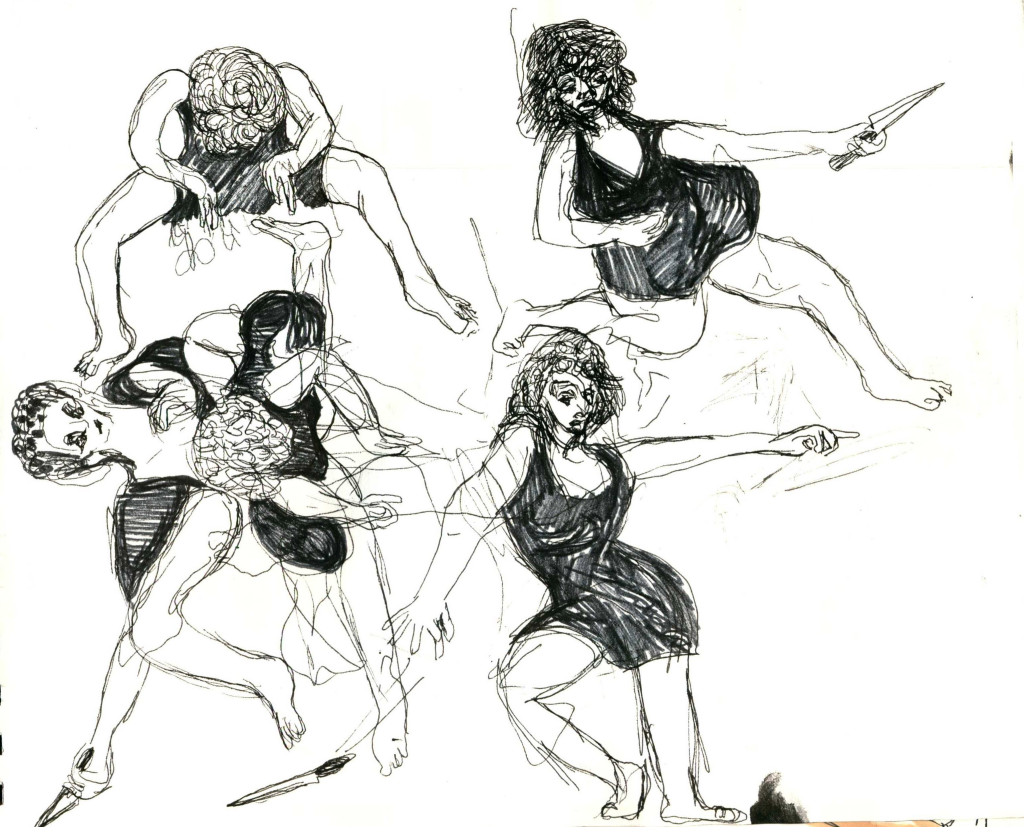 After Intermission we juggle with two emotional pieces, “Storm” (sketched above) and “The Maestro”. We are divided between the two different realities in a conflicting way. By twirling a knife in the first piece to drinking Savignon Blanc in the other. I think there are some elements in both of these acts which peel back an immediate impression. In “Storm”, by Asya Zlatina, Ashley Searles dances in black and makes quiet motions clash, and her erratic gestures with a knife create a sense of danger.

In “The Maestro”, a short play by Josh McIlvain, there are two sitters, Ezekiel Jackson and Sara Vanasse, socializing about pedophilia, genocide, and slavery. Similarly, the sexy personae of intimacy by Ashley Searles, and untamed nonsense from Ezekiel Jackson and Sara Vanese is consistently shocking. What pleased me was the violence and grace that balances well in context with the other acrobats and comedy in the previous acts.