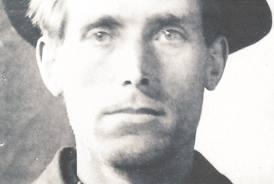 The crumbling interior of Eastern State Penitentiary provides the perfect setting for Swim Pony’s sold-out remount of its 2006 Fringe hit THE BALLAD OF JOE HILL, an original take on the real-life historic songwriter and labor activist executed in Utah in 1915 for two murders he probably didn’t commit. Combining song, storytelling, and movement to convey the events surrounding the working-class hero’s martyrdom for the cause, the visually stunning production employs dramatic staging down the bays of the long and narrow cell block, haunting spot- and back-lighting, vintage music, and redolent costumes that conjure the era and evoke the dreamlike mood of an old sepia-toned photograph.

Live singing by James Michael Baker, accompanying himself on guitar and harmonica, and a wistful performance by Dawn Falato as Hilda, the mystery woman who might have been Hill’s alibi, are highlights of the show. In contrast with the seriousness of the subject, sequences of dark comedy and vaudevillian clowning serve as metaphors for the joke of a sham trial and the circus-like atmosphere of the media frenzy that surrounded it, and the enigmatic protagonist—known by different names at different times, but always representing the common “Everyman”—is portrayed by a different actor in each episode. At 90 minutes, the show runs too long and the trendy “clowning” becomes redundant, but the talented cast—also adept at nuanced acting—captures the spirit of the early cartoons that inspired it. [Eastern State Penitentiary] September 5-15, 2013, fringearts.com/festival/2013/the-ballad-of-joe-hill