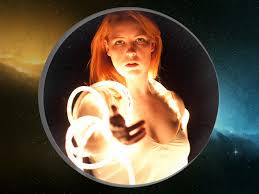 “You can see–but you cannot change–the choices you have made.” That’s one character’s assessment of the afterworld in Found Theater Company’s THIS IS THE TWILIGHT KINGDOM, a devised piece directed by founding Foundling Sean Lally. But it’s not so much life and death that KINGDOM is concerned with, but everything. One character believes she has cracked the elusive Theory of Everything—she’ll tell you so herself!—and during the play’s 55 minutes we find that space, love, music, pain, etc.—is everything. Everything is everything.

Because the piece is not a linear narrative—think of it as a surrealist painting brought to life and set to music—there is a coldness to KINGDOM. We have no fully-formed characters to identify with—personality, like gender and language and time, is a construction—and so we feel distanced from the subject matter, broad and all-inclusive as it is. But it’s cold out there in space, too, and that’s where most of KINGDOM takes place. The actors make fine use of the Painted Bride’s limited playing area, sometimes standing twenty feet tall or popping out of doors you never knew were doors. Together they dance and sing and test the limits of their bodies in a painstaking effort to get to the bottom of everything. KINGDOM is at times heavy-handed but the dedication with which the actors attack such Lynchian material is a thrill to behold. The secret of the universe, we find, is that the universe holds no secrets. [Painted Bride Art Center]. September 5-22, 2013. fringearts.ticketleap.com/this-is-the-twilight-kingdom.

One Reply to “[5.1] THIS IS THE TWILIGHT KINGDOM (Found Theater Company): Fringe review”