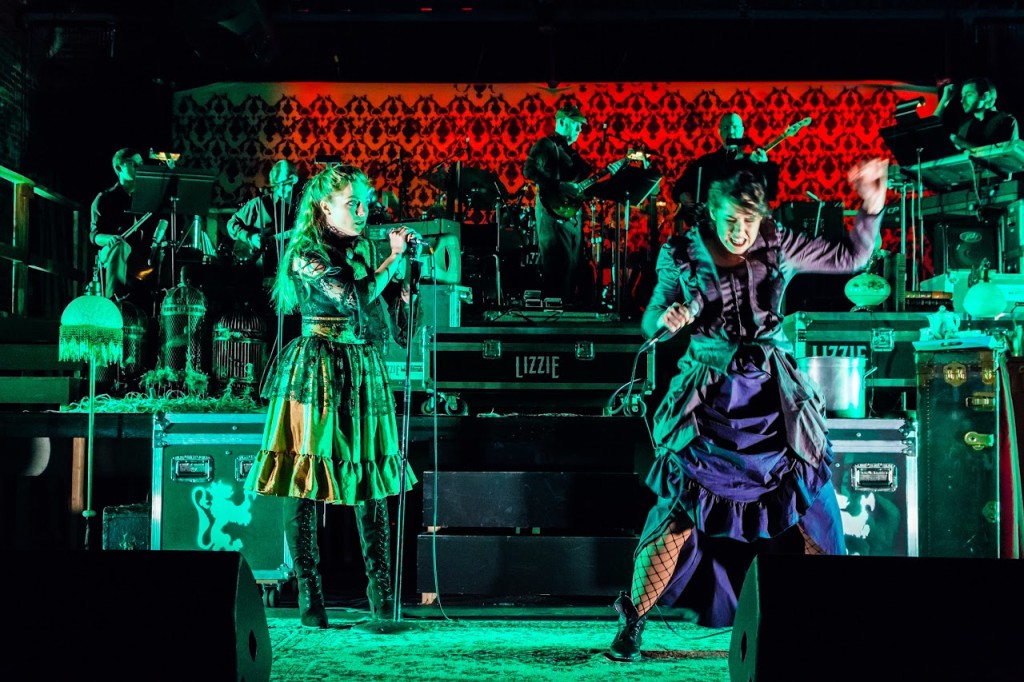 This is what “stifled rage” sounds like. Not so stifled, but certainly enraged. LIZZIE, a rock show that is 11th Hour Theatre Company’s latest production, lets Alex Keiper in the title role tear up the place, belting out one song after another. This gothic musical features four intense performances from a talented cast and a six-piece onstage band led by Dan Kazemi. Kate Galvin directs.

The show, written by Steven Cheslik-Demeyer, Alan Stevens Hewitt and Tim Maner, takes as its narrative the old story—Lizzie Borden kills her parents with an axe and gets away with it—but provides a feminist agenda and a new motivation. The cruel pigeon-killing father is now a sexual abuser, and the wicked step-mother a gold digger who wants to cut Lizzie and her older sister Emma (Cara Noel Antosca) out of the will. There’s a maid (Rachel Brennan) whose resentment simmers on a low boil, and a next-door neighbor (Meredith Beck) whose love for Lizzie simmers likewise. They all do their share of belting, and drive the narrative forward using hand-held mikes.

The music is hard-hammering, loud, generic rock, with some sensational moments. It begins with a song whose lyrics are hauntingly repeated, setting the scene and the atmosphere: “In the house of Borden/ There is a lock on every door/ In every room a prisoner/ Of a long and silent war.” There is a ferocious duet, “Sweet Little Sister,” and a lovely if absurdly hypocritical hymn, “My Soul Waits for the Lord,” which would have been much more effective if the band hadn’t overwhelmed the voices.

The gruesome murders have been memorialized in the children’s jumping-rope rhyme:

Lizzie Borden took an axe
And gave her mother forty whacks.
When she saw what she had done,
She gave her father forty-one.

Wikipedia, always factually diligent as we all well know, adds this footnote: “In reality, Lizzie’s stepmother suffered 18] or 19 blows; her father suffered 11 blows.”

The real question is not how many whacks, but who teaches kids this stuff?