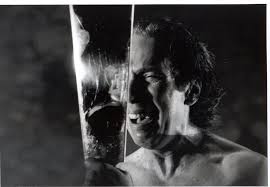 To call this play My Big Fat Greek Endurance Test would be flippant, but it wouldn’t be far off the mark. Certainly AJAX, THE MADNESS tests the artists’ stamina and offers audience members the opportunity to possess their souls in patience. The performance opens with a very long, slow reproduction of the mechanics of laughing, a deconstruction that strips the sound of its humor and exposes it as thoroughly mad. While the AJAX performance is based on the Sophocles play of the same name, it offers no context or background, but hones in on and isolates a key point of the Ajax myth and obsessively repeats it with a slightly different interpretation each time. In an extremely controlled physical and aural exploration of a vicious madness, the three actors (Tasos Dimas, Savvas Stroumpos, Maletis Ilias) maintain synchronized postures that change very very slowly. Nothing is extemporized or out of control in this stylized, ritualized representation. This is stealth political theater, yet the actors are deeply committed to performance over and above the politics.

Respected internationally, but less well known locally, artistic director Theodorus Terzopoulos’s experimental company has antecedents in theatrical pioneers of the past. The influence of Jerzy Grotowski permeates the work. To American audiences of an age this Attis Theatre production may resemble a more disciplined approach to the Grotowski-influenced philosophies of U.S. alternative theater movements of the early 60s, like Joseph Chaikin’s Open Theater and to a lesser extent Beck & Molina’s The Living Theater. But, going further than his predecessors, Terzopoulos pares everything down to its essentials of rhythm and bodily movement in a manner that resonates with the work of his contemporary, Tadashi Suzuki. The show is performed in Greek, with supertitle translations by a non-native English speaker. [The Wilma Theater]. September 5-7, 2013. Fringearts.ticketleap.com.

Another Phindie take on AJAX, the madness.