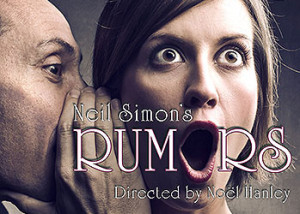 Noel Hanley’s masterful treatment of Neil Simon’s RUMORS exemplifies a farce done right. From the very beginning, we are thrust into a black-tie affair that has gone horribly wrong.  So much so, that the very first guests to arrive, the Gormans (Claire Drake and Vincent Raffaele), find Charlie, the guest of honor, lying in a pool of his own blood from a self-inflicted bullet wound to the ear. Strangely enough, both Charlie’s wife, Myra, and the help, are mysteriously missing from the scene. This leaves the Gormans in a peculiar situation with quite a mess to cover-up. As they scramble to call the doctor and come up with a believable alibi, the door rings announcing the next guests who inevitably want to know where Myra and Charlie are.

From this point onward, the drama builds as waves of new guests find out, through whispers and private exchanges, about the secret suicide attempt of Charlie, the Deputy Mayor of New York.  Every couple enters bringing problems of their own adding to the circulation of speculating lies which compound and multiply upon themselves in the most absurd and ridiculous of ways. The social dynamics revealed speak to the ends in which high-society will go to protect its own propriety – unraveling scenes nothing short of hysterical.