Republished by kind permission from the Dance Journal 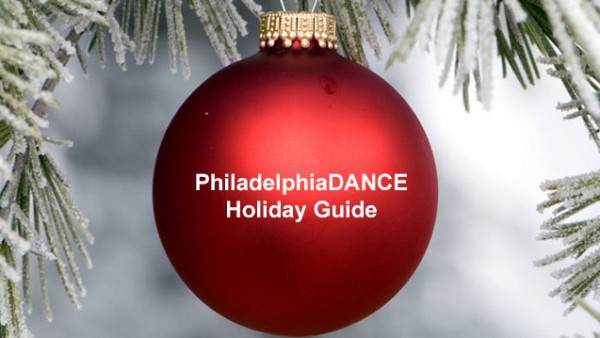 With its unforgettable music, enchanting story and the vivid imagery, “The Nutcracker” has become synonymous with the holiday season. It is a classic tradition that has weathered the test of time, captivating audiences’ hearts and minds for generations. Philadelphia offers a whole host of Nutcracker productions – from dance school performances, to international touring companies, local companies and of course the highly acclaimed Pennsylvania Ballet.

But in addition to the myriad of Nutcracker offerings, Philadelphia’s dance community offers up a host of other productions that have become holiday traditions. Such are Dance Del Bello’s Christmas Carol, Eleone Dance Theater’s Carol in Colors, Contempra Dance Theatre’s Philly-Nut-Crak-Up, Ballet 180’s Charlie Brown Christmas, Roger Lee Dance Christmas Celebration and some great holiday tapping by Footwerx and The Lady Hoofers.

Below is our annual guide to this season’s best. Take a moment to unplug from the television, the internet and cell phones; set aside the political differences of the day, gather up the kids and family, and start your own special tradition.

WHERE TO SEE THE NUTCRACKER

It simply wouldn’t be the holidays in Philadelphia without the timeless family tradition of George Balanchine’s The Nutcracker®. Be swept away to the magical Land of the Sweets as Tchaikovsky’s iconic score pairs with lavish sets, opulent costumes, and the enchanting performances of the dancers. This classic tale touches the hearts of all with its endearing story of a girl, a gift, and a wondrous dream.

The Rock School for Dance Education presents Nutcracker 1776, a 70-minute ballet featuring absolutely amazing dancing by rising stars from around the world, stunning costumes, and fabulous visuals suitable for your entire family ages 1 to 100. It is an adaptation of the holiday classic in a high-energy performance combining Tchaikovsky’s timeless musical score with Philadelphia’s historic and revolutionary past creating a magical experience for an audience of all ages. Prepare to “go nuts” and be blown away!

The biggest Christmas experience of the year, direct from Russia, is coming to Philadelphia… the original Moscow Ballet’s Great Russian Nutcracker! “Knock Out!” Raves the New York Times. Enchant the whole family with larger than life magical props, a 60 foot growing Christmas tree and spectacular Russian-made costumes and sets.

Pennsylvania Academy of Ballet – The Nutcracker

For over 25 years, the Pennsylvania Academy of Ballet has been bringing the holiday classic ballet “The Nutcracker” to our stage. A fun way for families to kick off the holiday season, the annual tradition features professional soloists and many of the region’s best dancers. The enchanting music by Tchaikovsky is one of his best-known works and the ballet, set at Christmas time, has become an American holiday tradition. Ninety-minute performances are appropriate for children four years old and up. Before and after the show the lobby is a winter wonderland filled with nutcracker gifts ideal for holiday shopping.

Join us for our timeless holiday tradition, The Nutcracker. Tchaikovsky’s magical score accompanies the classic story of an adventure to the magical Land of Sweets as the audience joins Clara and the Sugar Plum Fairy on the journey of a dream. One of Chester County’s signature holiday events, this performance features original, traditional choreography by David Kloss and Donna L. Muzio, integrated with new choreographic elements by Nancy Page.

The Hill Center for the Arts, Beech and Sheridan Streets, Pottstown, PA

See dance set to the brilliance of Transiberian Orchestra’s “The Carol of the Bells” followed by live piano renditions of Tchaikovsky’s famous Nutcracker Score. Round the evening out with “The Nutcracker Suite” staged by Kirov Ballet principal dancers Andrei Ustinov and Elena Martinson! It should be a Holiday treat for the entire family!

International Ballet Exchange presents The Nutcracker with the Donetsk Ballet

Eighteen professional dancers from the Donetsk Ballet Company will grace the stage with 45 area students who will dance the children’s parts in the holiday favorite, “The Nutcracker.” Led by former superstar, Vadim Pisarev, Artistic Director, the company dazzles audiences throughout the world with their impeccable technique and artistry. There are only two shows. The troupe will be returning to the Philadelphia area despite continued upheaval in their city and country.

Pages to Pirouettes – The Nutcraker

Enjoy the tradition of The Nutcracker with Pages to Pirouettes as we perform the abridged version. We read the story and magically have it come to life through dance. An interactive program with beautiful costumes and music to the delight of audiences of all ages!

Experience the wonder and joy of The Nutcracker!! Enjoy Act I’s lively party scene, the epic battle between the Nutcracker and the Mouse King, and the regal Snow King and Queen greeting Clara to the Snow Forest! Top it off with Act II’s Land of the Sweets, where the Sugarplum Fairy and her Cavalier have prepared a feast of sweets and treats for Clara! A fabulous family tradition!

Philadelphia Dance Theatre will be presenting a new version of their annual Nutcracker. Artistic Director, Joy Delaney Capponi, conceived a production of The Nutcracker created to capture our own historic community and neighborhood. Germantown, Mt. Airy and Chestnut Hill have a rich history to be shared and celebrated. After ten years of presenting a very traditional Nutcracker, Capponi felt the inspiration to tailor-make PDT’s Nutcracker in this way tangential to the recent opening of the Kurtz Center at the William Penn Charter School, where PDT now regularly performs. With the new wonderful performing arts theater in the community, the timing was ripe for this new and vital work to be presented.

Norristown’s celebrated multi-disciplinary arts organization is excited to announce their 5th annual production of The Norristown Nutcracker, to be held at East Norriton Middle School, in Norristown, PA.

Enjoy our twist on this wonderful holiday tradition and join us to experience the classic tale of Clara’s magical journey. The Norristown Nutcracker features a synthesis of multiple dance styles, live music, acting, hand-made costumes, and original artwork and scenery. Featuring the work of ACPPA’s student talents, the story is personified with live dance–ballet, jazz, hip hop; and live music–piano, guitar; all performed by students and teaching artists of the Art Center. Highlights of the show include the Nutcracker doll’s transformation into the handsome Prince, Mother Ginger’s sprightly Polichinelles, high-energy Russian Trepak Dancers, Drosselmeyer’s toys becoming animated and full of life, as well as many new exciting additions!

The Philadelphia Dance Academy, now in its 12th season, and its youth performance company, The Philadelphia Youth Ballet, celebrate their 7th annual production of the Nutcracker: the popular ballet that has become a holiday classic throughout the world. Our production of the Nutcracker features performances by Dance Academy students, Youth Ballet members, and professional guest artists.

Join us for this favorite holiday treat set to Tchaikovsky’s magnificent score and performed by over 100 of the area’s finest dancers. DVDA’s Nutcracker is a festive and magical way to ring in the holiday season and to introduce children to the power and beauty of ballet. Children from 3 to 93 will be mesmerized by the costumes, beautiful music and exceptional dancing in this lavish production.

Performed by the Bolshoi Ballet at the Bolshoi Theatre in Moscow. Choreography and Libretto by Yuri Grigorovich – Music by Pyotr Ilyich Tchaikovsky – 2 hr 15 min. Starring Denis Rodkin, Anna Nikulina, Andrei Merkuriev, Vitaly Biktimirov and the Bolshoi Corps De Ballet. Christmas would not be complete without the enchanting tale of young Marie and her nutcracker prince! Danced by the Bolshoi’s principals, Russian ballet master Yuri Grigorovich’s staging of E. T. A. Hoffmann’s fairy tale will transport children and adults alike to a world of magic and wonder for the holiday season. Captured live on December 21, 2014.

By popular demand, ContempraDANCE Theatre’s “Philly Nutt Crak-Up” is back at the Painted Bride in Philadelphia for 2 weekends this season. Artistic Director, Gail Vartanian and her infamous Rappin SugarPlum Fairy return with the battling Hip Hoppin Rats, City Hall Dolls, Captain Philadelphia and Liberty Belle-Anne, for another season of the hilarious holiday dance spoof, “Philly Nutt Crak-Up”. This “nutty” holiday take-off of the classic Nutcracker is based on an original rap song written by the SugarPlum Fairy herself. This theatrical extravaganza is a story filled with superheroes, kung-fu fighting, Penn’s Angels and our very own South Street Rocky-Ettes at the Kingdom of Prussia. You don’t want to miss this year’s 2016 “surprise” new City Hall Doll as well as new acts to entertain you even more!! “Philly Nutt Crak-Up” is filled with references to local Philadelphia places, personalities, foods and skylines, combining comedy, hip-hop, jazz, modern and ballet dance creating a memorable event for our audience. “ Philly Nutt Crak-Up” has been featured in Philadelphia Magazine, Dance Magazine, the City Paper, a feature segment on Channel 6 ABC’s Prime Time Weekly show, NBC’s 10 show and Channel 17’s Eye Opener segment. New acts, new faces! Fun for all ages, even your DAD. You don’t want to miss this one!

Arts Bank at the University of the Arts, 601 South Broad Street, Philadelphia

A holiday production that is bringing tapping back one sole at a time!

Philadelphia’s premier all-female professional tap company, The Lady Hoofers Tap Ensemble, is pleased to present its 4th Annual Holiday Concert. The hour-long, family friendly concert will feature the Ensemble’s First Company Dancers, its Youth Ensemble, and a live jazz trio at the evening performances. The concert will include a preview of Tapcracker, the ensemble’s all tap Nutcracker set to the music of Duke Ellington and other unique arrangements of the holiday classic. In a returning audience favorite, Waltz of the Snowflakes, choreographer Meg Sarachan references a traditional ballet corps with 10 dancers and classic formations, but shakes things up with an onstage snowball fight. New this season, the company’s youngest Youth Ensemble dancers form a rag tag army of mischievous mice, complete with their very own Mouse Queen. Choreographer Kat Richter was inspired by Ellington’s score: “These mice are sassy. It’s all about girl power instead of the prince coming to the rescue like he does in the traditional Nutcracker.” The mice are gearing up to battle the toy soldiers, who will perform a returning acapella piece by guest choreographer Sarah Mason which premiered in The Nutcracker on Broadway in 1999, restaged by Lady Hoofers’ Managing Director Katie Budris, who performed in the original cast. This year also marks the return of live jazz music with a trio of Philadelphia musicians led by James Santangelo accompanying dancers with songs from A Charlie Brown Christmas.

The Peek-A-Boo Revue Holiday Spectacular is back with brand new shenanigans because nothing says “holiday cheer” quite like twirling tassels, luscious eyelashes, and bare asses! As Philadelphia’s longest running burlesque show, The Boo brings only the best in dance extravaganza, classic striptease, and ribald humor. Behind shimmy-shaking beauties and the bawdy emcees is a band of world class musicians known collectively as the Striptease Orchestra. With the sites and sounds hitting you all at once, The Peek-A-Boo Revue will have you primed and ready for the most wonderful time of the year!