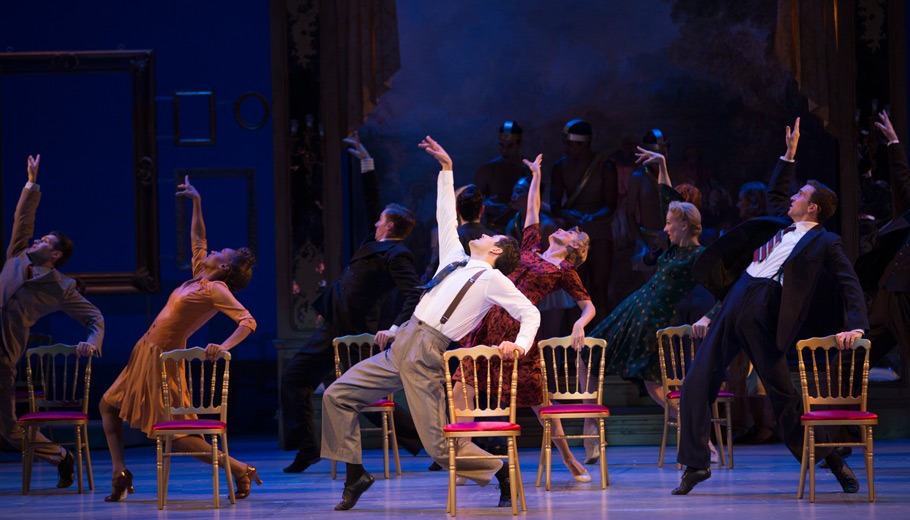 This opulent production of AN AMERICAN IN PARIS is the opening show of the Broadway Philadelphia season at the Academy of Music. The Tony-winning musical is filled with great songs by the Gershwins strung along a romantic plot line (Craig Lucas provided the book), but this is primarily a dancing show. And do they ever dance.

Starring Garen Scribner as Jerry, the American who falls in love with Paris and Sara Esty as Lise, a gamin Parisian ballerina with a secret, their tangled romance is gorgeously choreographed by Christopher Wheeldon who also directed. Both Scribner and Esty are professional ballet dancers who can sing and act.

The plot begins in 1945 with the Arc de Triomphe as the backdrop; the City of Light has gone dark, but a crowd tears down a huge Nazi flag and replaces it with the French flag to celebrate the Liberation. Jerry, a soldier turned artist, decides not to return to America; he meets another American veteran, Adam (Etai Benson), a composer who is giving show biz lessons to Henri (Nick Spangler—the best singing voice in the show), heir to an industrial fortune. All three men fall in love with Lise.

This new show with its new stars pays loving tribute to the 1951 movie which starred Gene Kelly and Leslie Caron, both very visible in the styles adopted by Scribner and Esty. Their superb pas de deux are sometimes sexy and sinuous, sometimes frisky and playful.

The visuals in the production are knockouts: wonderful 1940s costumes and a set that provides the streets of Paris, living Picasso paintings, quirky projections that provide locale after locale (both set and costumes were designed by the award-winning Bob Crowley).

The songs give us one gem after another: “I Got Rhythm,” “The Man I Love,” “’S Wonderful,” “But Not for Me,” “I’ll Build a Stairway to Paradise” (this turns into a dream production number worthy of Radio City Music Hall) and plenty more. AN AMERICAN IN PARIS is pretty much summed up by one lyric: “Put on your dancing shoes/Watch your spirits climb.”  If your dancing shoes aren’t quite up to the task, this show will do the trick.