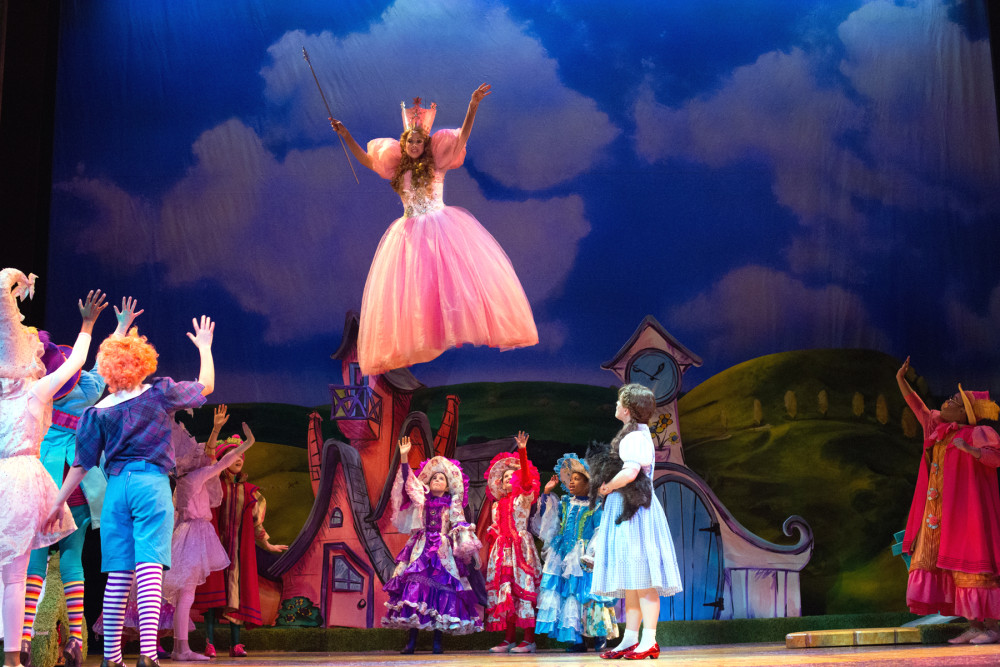 There’s no place like home, and this winter you don’t need to drive very far to learn that lesson again at the Walnut Street Theater’s musical THE WIZARD OF OZ.

The show is family-friendly and sweet, with a full cast of Philly-area children playing Munchkins. It’s a stage version of the iconic 1939 film, adapted by John Kane for the Royal Shakespeare Company in 1987. The musical is faithful to the film, and with a classic like this one, discussing the plot doesn’t need a spoiler alert: yes, Dorothy does return home! Instead, the magical, experiential effect of the tale – here on stage and initially on the screen- comes from the colors.

As most children and grown-up kids will remember, there’s a moment in the movie when the switch flips and hey, Toto, we’re not in Kansas anymore! Out of the black and white tones of Omaha farmland we are transported not only over the rainbow but into the rainbow—a land infused with primary colors and psychedelic patterns.

As one of the first Technicolor films, Wizard of Oz captured the eyes and hearts of America. Set designer Stephen Gifford and costume designer Mary Folino do the same for this Philly production. Folino’s costumes range from Munchkin-sized Einstein look-alikes to gigantic flapping black crows which drive the Scarecrow out of his wits, and dancing Poppies with their green bodysuits and red petal crowns. Stephen Gifford and David Neville (lighting) design rapid projections on a translucent screen to simulate the hurricane, an Art Nouveau-inspired Emerald City and a framed moving picture of Voldemort-like Wizard. The crew’s work even extends to animal tTrainer William Berloni, who has prepared two rescue terriers, Dusty and Nessa, to bring a real-life Toto into the show.

The set satisfied, and so do the actors. But while the cast and crew reconstruct the Wizard of Oz film expertly, it’s a shame that it goes no further than that: a reconstruction. The surprises come from digesting the plot without the gullibility of childhood: the sudden, unquestioned deaths of the Wicked Witches, the bizarre backstory of the con-artist Wizard, the helpful but very flaky Good Witch. The weird ‘happy end’ for the Scarecrow, the Lion and the Tin Man—awarded with a diploma, a medal and a ticking heart-shaped watch, respectively—offers a somewhat cynical commentary on social markers of intelligence, heroism, and emotion.

Ultimately, the visuals and dialogue could have thrown some contemporary cues. For an adult this musical is ultimately more of a throw-back than a reimagining. THE WIZARD OF OZ delivers the timeless classic, but without any creative hints to our time.

Then again, during intermission I saw a little girl in a blue dress with frilled-up white sleeves and shiny ruby slippers clutching a black stuffed dog to her chest. She seemed as happy as could be, and for a children’s show like this one, it’s hard to ask for more.