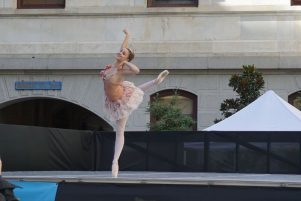 Pennsylvania Ballet II (PB II) performed under clear, blue skies, with William Penn as their backdrop, on Wednesday, October 5, 2016. The “second company” dancers presented excerpts of Pennsylvania Ballet’s new season. The performance took place at the City Hall Courtyard as part of a new outdoor performance series, Culture in the Courtyard. This series showcases Philadelphia arts organizations and performers and is free to the public.

The 45 minute program was packed with a variety of pieces highlighting the company’s versatility. The performance was nicely paced and included Classical Ballet, Contemporary, Swing, and Character dance.

Ekaterina Pokroskaya, Julia Rose Sherrill and Sydney Dolan were cast as the Odalisques from the pirate themed, Le Corsaire. The choreography included multiple pirouettes, razor sharp petit allegro and développés stretching towards the skyline. Despite a few minor wobbles, these ballerinas never fell out of character and looked stunning in red and gold, two piece costumes.

The Fall was choreographed by Angel Corella and was titled after Electric Light Orchestra’s song by the same name. The piece was a fun, feel good, contemporary solo showcasing the strength and stage presence of Ashton Roxander. The music provided changes in dynamics and rhythm, which were highlighted by Corella’s choreography. The Fall and the Swing Pas de Deux, also choreographed by Corella, are performed at special events such as Culture in the Courtyard.

Sydney Dolan, partnered by Austin Eyler, was exceptional in the Black Swan Pas de Deux. Her performance had intensity and passion, and was at times flirtatious. Her incredible flexibility was utilized in ponche arabesque and attitude derriere. Dolan and Eyler alternated solo variations that were equally impressive in skill and execution.

Another noteworthy dancer was Cassidy McAndrew. McAndrew was elegant and graceful in both Cinderella’s solo and Tchaikovsky Pas de Deux. She danced with strong musicality and expression.

This gifted ensemble of eleven dancers gave the audience not only a glimpse into the season’s repertoire, but also to the bright future of the company.