Brian Friel (1929-2015) is a dramatist and story writer who has been referred to as the “Irish Chekhov”. Friel’s play MOLLY SWEENEY (1994), currently in production by Irish Heritage Theatre, is a two-act play in monologues by its three characters: Molly, a blind woman; Frank, her husband; and Mr. Rice, her surgeon. All characters in Molly Sweeney deal with blindness—internal and external—in one way or another. 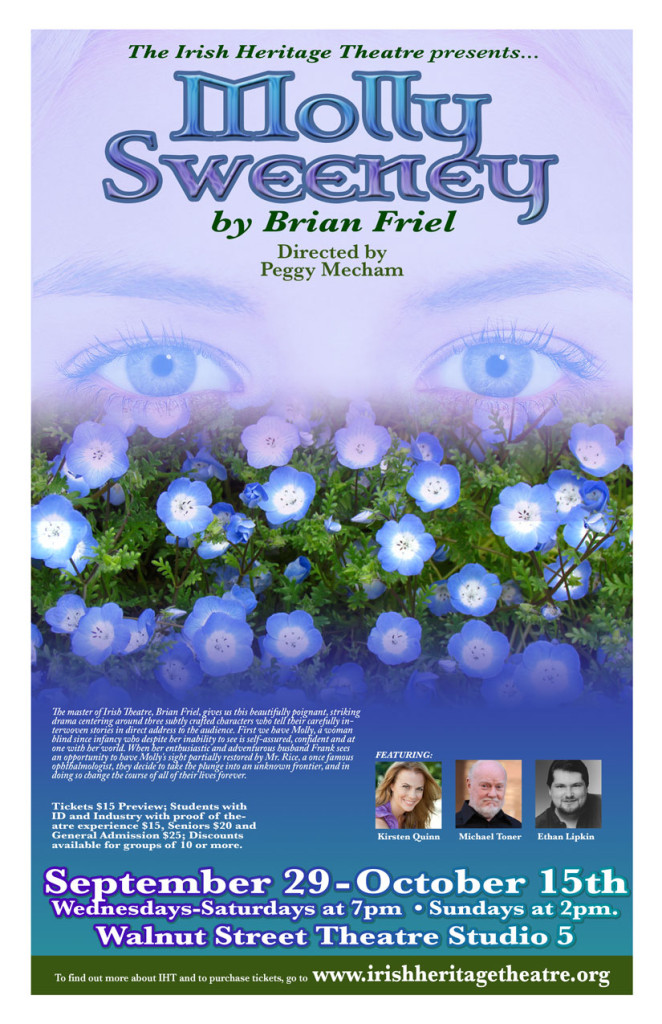 Henrik Eger: What are the things that intrigue you the most about this play?

Peggy: Brian Friel is so strongly identified with modern Irish theatre and culture that the majority of his plays are informed by the Irish experience. MOLLY SWEENEY is distinctive in his body of work in its subject and with its focus on the psychological exploration of its characters’ lives. I was drawn to both the beauty of the language and the relationships of the characters, even though they never directly address one another.

Kirsten: What I find most intriguing about this play is that despite its unusual structure of long monologues without any actual scenes, Friel still maintains a beautifully crafted story. There is nothing that can really be excised from the script. There are so many interconnections, and often, the moments that require no words are the most powerful of all.

Michael: Most intriguing for me about MOLLY SWEENEY is Brian Friel’s use of language and his poetic sense of rhetoric, seen throughout the play, but especially at high emotional moments. The characters are carefully constructed and are given the most eloquent speech currently in the English language theatre. Other elements of intrigue include meticulous development of character, the masterful use of irony, and a world-class dramatist’s musical methods of composition.

Ethan: The format of the play itself—all monologues, no directed interactions between the three characters—is intriguing. The idea that the characters are telling a story that they already know the ending to adds to the intrigue: How much of that should the character reveal through the storytelling?

Henrik Eger:  Describe the scene that moved you the most?

Peggy: There are many moving and significant moments in this play. I particularly love when Molly describes the party the night before her operation. She begins by discussing her neighbors and friends, really her community, and suddenly reveals her fear of exile and resentment at the self-interest of her husband and doctor.

The play is emotionally complex and so moving that we, too, feel what she is about to risk. Even more unexpectedly, she abandons convention and allows herself to fully experience all the conflicting and terrifying thoughts that assail her—revealing the dangerous journey she is about to undertake.

Kirsten: Of the many moving moments of this play, Mr. Rice’s lament of the loss of his wife, Maria, stands out. I am also deeply touched by Frank’s reaction to Molly when he sees her after the surgery. As for my role as a blind woman, seeing for the first time is quite a mind-blowing moment. The same holds true for the final monologue, when I come to terms with my blindness and the blurred lines between fantasy and reality.

Michael: I am most moved by Molly’s initial experience of sight, and the “delight and excitement” that grips her when she encounters the various images now available to her—which, unfortunately, will soon disappear. Friel sets the audience up for the subsequent tragedy here, making the contrast all the more poignant.

Ethan: Molly has a monologue in the second act after her vision is restored where she talks about how terrifying the onset of vision is, and Kirstin handles it with great subtlety.

Henrik Eger: Describe the scene that challenged you the most?

Peggy: The most challenging scenes were the opening and closing monologues for each character. The first monologues were very important because they introduce the respective characters and it was necessary to share their individual circumstances and singularity, while allowing the audience to discover the connections that bind them. The closing monologues were equally challenging because they are essential so that we can recognize how profoundly each of the characters is transformed by what occurs.

Kirsten: The scene that challenged me the most has to be the party scene which occurs the night before the operation, when Molly swings from absolute elation to utter despair. There is a whirlwind of emotion and activity in that scene. Trying to hit all of those marks is quite an undertaking.

Michael: Dual challenges for me in this play: the physical challenge of gauging proper fit and balance with my prosthesis, due to changes in shoe, pitching me forward at times. This scenario occurs whenever I stand from sitting a long while. And then, of course, there is the psychological challenge of filling my character with the life the author intended for Mr. Rice.

Ethan: My first monologue in the second act—a four pager—starts comically, becomes what on the surface seems to be a long narrative section, which in turn triggers a manic tirade that is only resolved by Frank’s sincere affection for Molly. The challenge was figuring out, with director Peggy Mecham’s help, how all these components inform each other.

Henrik Eger: What aspects of your own life are you bringing to this play?

Peggy: It is something deeply personal. While most scholarship and criticism of the play center around the ideas of seeing and knowing, I was most struck by Friel’s references to exile, which is both a solitary and common experience in human history. Most people feel a sense of exile or isolation at some point in their lives. This idea moved me in directing the play. Perhaps it is the strange times we live in when millions of people around the world are displaced, trying to survive in differing types of exile.

Kirsten: I am bringing several aspects of my own life into Molly Sweeney. My father, who passed this year, was one of the most important people in my life. This is true for Molly as well. I have come to learn a great deal about my Mother as she deals with my father’s passing, and as Molly says, “I love her all over again.” My husband and I fell in love immediately upon meeting each other, as do Molly and Frank. Fortunately, my husband and I have a much stronger relationship. There are many other personal parallels—for example, Molly is a swimmer, as am I.

Michael: I can only answer in the way that Konstantin Stanislavski, Alfred Adler, Nikolai Evreinov, Uta Hagen, and so many other legendary acting teachers have advised: The private aspects of an actor’s own life which he brings to the performance of a play are to remain private, as they are the intimate material, the woof and warp of his or her acting experience, the kernel of his or her gift.

Ethan: Aside from a strong sense of curiosity, I don’t really have too much in common with Frank. However, I am always interested in what makes people tick so it interests me to play characters outside my comfort zone.

Peggy: Directing this special play with such an extraordinary cast of thoughtful and accomplished actors significantly impacted my directing. The structure of the play is unusual and presents a set of challenges, but in every rehearsal we discovered new insights and possibilities. The actors immediately incorporated them into their characters. It was a memorable experience and I will treasure it.

Kirsten: Molly Sweeney has been one of the most challenging roles of my career as an actress. To play a blind Irish woman who runs the full gamut of emotions and has much to say—22 pages of monologues—is quite a mental and physical exercise, but I love it. To work with such an amazing cast, director, and crew has been absolutely wonderful.

Michael: I have done many of Brian Friel’s plays in my career as an actor, director, and sometimes both at once, and have met him and his wife Anne Friel at their home in Donegal where he had just finished his masterly play, Translations. I have a very high regard for this great playwright and his body of work with its breadth and depth, its language and humor, and its revelations of the human spirit—in my opinion, all worthy of a Nobel Prize for Literature.

Ethan: It was a pleasure working with director Peggy Mecham, and Michael Toner and Kirsten Quinn—two fantastic actors.