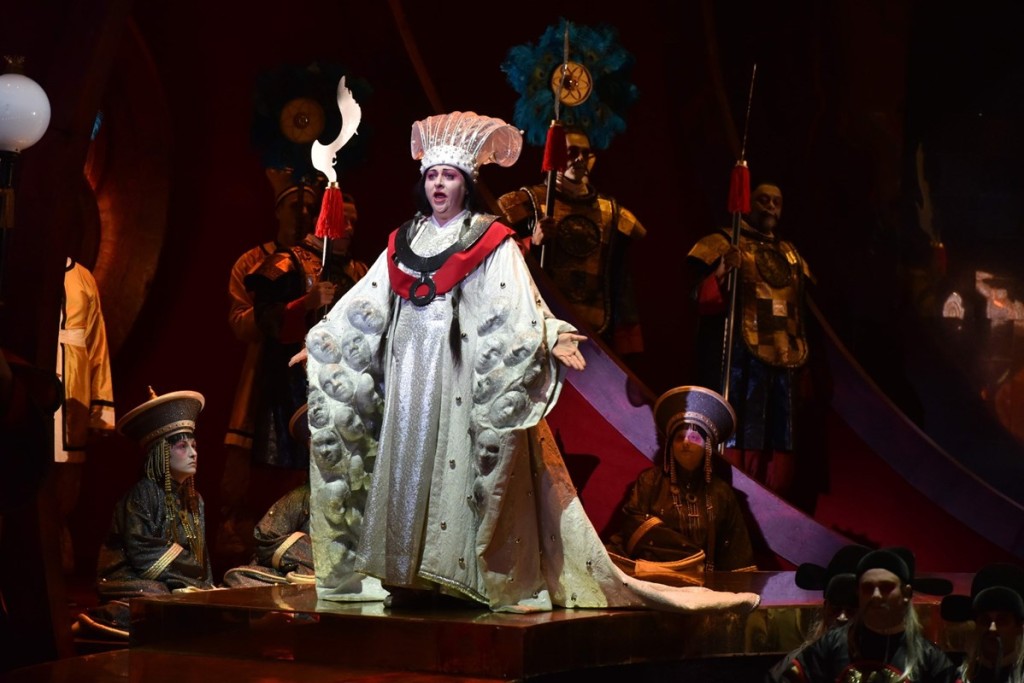 Giacomo Puccini (born 1858) left his last opera, TURANDOT, unfinished at his death in 1924. It premiered in 1926 with the last bit of the opera performed, then a spokesman walked out to announce to the audience that this is where the maestro left the work at his death. Today, we have the opera later completed by Franco Alfano.

Opera Philadelphia is presenting the completed work at Philadelphia’s Academy of Music September 23 through October 2, 2016. The production is a joint venture with Minnesota Opera, Cincinnati Opera, Pittsburgh Opera, Utah Opera, and Seattle Opera; it might be the most travelled and most seen production in the United States. It is a marvelous show, well cast, with excellent production values.

In the lavish program, Renaud Doucet, director, and Andre Barbe, set and costume designer, speak about their production. Integral to their vision was the use of circles and numerology. Many examples are listed with one outstanding example of special interest. We learn that the number six in Mandarin is pronounced “liu,” representing blessing and happiness. This auspicious number was used by Puccini for the name of his tragic heroine, Liu. Doucet and Barbe are not only artistic partners but also partners in life.

Besides Doucet and Barbe, there is a panoply of talent responsible for this grand spectacle of sound and sight. The most interesting technician listed must be Max Vaspoli, who is listed as Child Wrangler. Corrado Rovaris conducted his fine orchestra with idiomatic flair and assured love.

In the title role, Christine Goerke was the horrible princess of China who has slain dozens of suitors when they could not answer her three riddles. Her cape brilliantly displayed her bloodthirsty appetite in that when opened, the heads of her suitors were stitched into the lining. Shocking, since we often associate such grisly things with American cultures like the Aztecs or Incas, not the Chinese. Goerke sang unstintingly in the fearsome role. As Calaf, the mysterious prince who risks his life for her hand, Marco Berti sang his important moments thrillingly. Joyce El-Khoury as Liu was outstanding. Her voice, fresh and lovely, also touched the heart with its plangent tones. Her graphic onstage suicide was shocking.  The trio of ministers, Ping, Pang, and Pong, often depicted as either racial stereotypes or Commedia dell’ arte caricatures, were earnestly portrayed by Daniel Belcher, Julius Ahn, and Joseph Gaines. Morris Robinson was a rich and cavernous-sounding Timur.

One Reply to “TURANDOT (Opera Philadelphia): Puccini at the Academy”