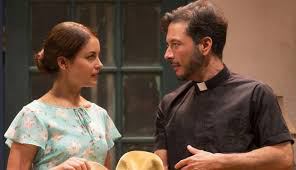 While Nilo Cruz broaches some interesting subjects and often provides his characters with profound things to say, his world premiere play, BATHING IN MOONLIGHT, never takes off dramatically.

The ingredients for tension and depth are in place, but it may that the core story, about a talented, charismatic priest who falls in love with a requiting parishioner, plays as too cut-and-dried on three scores: the inevitability of romance, the priest’s inner turmoil as he weighs his religious against his romantic passion, and the bouts the priest has with his by-the-book bishop. Scene after seen regarding Father Monroe, a Cuban whose parents named him for Marilyn, are pregnant with possibility, and while there is some delivery and certainly enough to consider by way of argument and debate, BATHING IN MOONLIGHT doesn’t register as poignant or heartwarming enough to satisfy.

Even when Cruz comes up with the right ending, the most desired and internally logical ending, the reaction is more one of gratitude and relief the author is brave enough to buck modern literary trends than it is a source of joy or an occasion of wringing the catharsis that you’d expect or that seems possible.

One reason for the emotional disconnect might be Cruz surrounds the focal situation of his plot with other stories that never seem important or take off in any significant, contrasting, or parallel way. A young man returning to his Miami home from an unsuccessful and clinically depressing experience in a South American medical school; an older woman, the abuela, generally sound in mind but teetering on dementia and given to fantasies about her life with the husband she married in Cuba and for whom she confuses her son; the struggle against household poverty in a devout genteel family that appreciates Schumann, pre-Columbian art, and Panama hats; mild references and attitudes towards a Cuba defected from and a Cuba to which one might return; a teenage girl’s ambition to become an oceanographer and study a nocturnal species that ‘bathes in moonlight;’ and even a death have little impact. Some of the threads, because they remain incidental rather than integral, seem to get in the way of the priest’s dilemma and the consuming love he has for a woman who we agree deserves his respect, affection, and ardor. Possibly because most of the threads are left dangling, either by being loose in Cruz’s plot weaving or simply incomplete. It seems, for instance, more convenient and pandering than sad or dramatic when one of the character’s stories is curtailed by sudden death. And it’s a character we like!

It seems as if Cruz was committed to deliver a script to McCarter director Emily Mann, who did a fine job cobbling “Bathing’s” ragged scenes, and had to hand it over before it was finished or even completely thought out. The brother’s story of dashing family hopes by failing to pass the medical boards and disappearing without a word for two years, especially hangs in mid-air. It needs more substance, solution, and symbiosis with the rest of Cruz’s plot. You wonder half the time why this character is in the play. The domestic side of Cruz’s piece cannot take hold because there are no linchpins or dramatic glue to hold them together. Matters hover as potentially important facts, but they don’t move us or even accrue to a greater whole. Though seeing the family is pleasant, it’s frustrating because for all that is said or hinted, little of consequence happens, and there’s a feeling the family scenes are only buffers to give breathing room to the more important business of Father Monroe’s war within himself.

That war does get your attention and rouse your emotion more than any other part of “Bathing in Moonlight.” The play begins with Father Monroe addressing the McCarter audience as if it was his congregation at a Sunday mass. He puts his arm around people, speaks to them as if he’s familiar, joshes with one person in particular, all while delivering a rather interesting, foreshadowing sermon on the need to adapt to do what is prudent or right, even if it clashes with dogma or faith. Specifically, he tells a parable about an Italian priest who allows American war dead to be buried by his church but not on the grounds consecrated for interment because he doesn’t know if the Americans have been baptized. Later, he regrets his decision to dishonor fallen soldiers, and in his repentance changes the path of his church’s wall to encompass the Americans’ graves. The point is there are many ways to shift perspective and find a way around proscription when the options is to be respectful, merciful, or just. Or even real.

This sermon becomes germane when Father Monroe becomes enamored of Marcela, a fortyish woman who comes with her family to worship in the parish that Father Monroe has made successful after years of decline because of his ability to reach his congregants and make them want to hear his words each Sunday. In addition to being a pious churchgoer, Marcela is a talented pianist who uses the church piano it practice and entices Father Monroe with the loveliness of her music.

As would be natural, Father Monroe wrestles with his vows. He cannot pursue nor consummate his love for Marcela while he is committed, as Father Monroe would be, to his vow of celibacy.

Cruz has hit on a great conundrum. Father Monroe is a moral man, a man who believes in his commitments and is confident he has the strength to honor them whatever the temptation. He is also happy in his vocation and a benefit to his diocese. He values his work and takes nothing lightly. He is not the type to take advantage when no one is looking or wink and grant himself an indulgence to have what he has agreed, according to Church doctrine and in a promise to the Holy Trinity, is forbidden.

Pretty heady stuff, huh? And plotted well by Cruz and played excellently, leaving no doubt Father Monroe is a man of ultimate probity, devotion, and honor, by the touching Raúl Méndez. It is Father Monroe’s soliloquies and dialogues with God that grab us and pull us close, the way we’d like to be, to “Bathing in Moonlight.” These solo scenes are given strong punctuation as Father Monroe argues with his bishop, a man who doesn’t want to lose a good priest but who cannot brook any breach in Church policy.

Not only does Cruz make us think of the difficult, soul-scorching choice Father Monroe, to whom we are and remain constantly sympathetic, must make, but he calls to mind to whole structure of the Church, one that has determined priests should go unwed and removed from all vestiges of sex and fleshly desire. Both issues resonate, and the one involving priests’ marriage speaks to the modernization some in the Church advocate and call for..

The curious problem comes when we see Father Monroe and Marcela. We realize their love is mutual and honest. Hannia Guillen, as Marcela, is as clear about her affection and ardor as Méndez’s priest. She announces her attraction before we see the pair together in an intimate setting. We witness romance on the bloom and know it is the kind of romance that must, at some point, speak its name whatever is gained or lost. Yet, for all of the understanding we have for the situation, and all of the empathy, we don’t feel the same passion during love scenes as we do when Father Monroe expresses his angst. Even when they get steamy, the love scenes play as comme il faut. The reason I used the word “curious” at the beginning of this paragraph is Méndez and Guillen are attractive actors who communicate the love bond between Father Monroe and Marcela. Their embracing should cause us to turn warm and happy that the Church will not stand in the way of their visceral urges. The question, one I can’t answer, is why these scenes remain so cold, or neuter. The right elements and right actors are there. It may be because Cruz regularly keeps taking us so far afield from Father Monroe and Marcela that their love scenes seem episodic instead of continuous, opportunistic instead of deep.

Father Monroe is the best defined characters in the play. Though each of the others. Including Marcela, have a distinct personality, they seems to be playing functionary roles rather than having full dramatic depth and dimension.

Priscilla Lopez is charming and funny as the abuela who has a sense of tradition but is happiest when she loses her perception of time, place, and who is actually with her, to relive her meeting and marriage with her husband, in Cuba and Miami, sometimes mistaking her son for his father.

Frankie J. Alvarez has the modern sensibility for Tavi, Jr., the son and slides into the role so smoothly, he doesn’t seem to be acting. He seems more buoyant than someone who is recovering from deep depression, but that can be from coping with the crisis and defeating it. In general, Alvarez enlivens Mann’s production. It is not the actor’s fault that Cruz does not explain Tavi enough or add something substantive to his part that would better explain his existence on the stage.

Cruz handles much well, but there are some wrong notes he needs to smooth as much as he needs to add flesh to the domestic story and supporting characters. News and public reaction to one of Father Monroe’s decisions seems out of keeping with anything that would actually happen. I am among the first to say that a fictional drama is free to create its own world on its own terms. In this case, Cruz means to reflect the real world, and his mirror is smudged or off-bevel.

Music is a major part of this production, starting with Marcela’s gifts as a pianist. Emily Mann wistfully ends her production with “The Moonlight Sonata.” Read more on Neals Paper >>