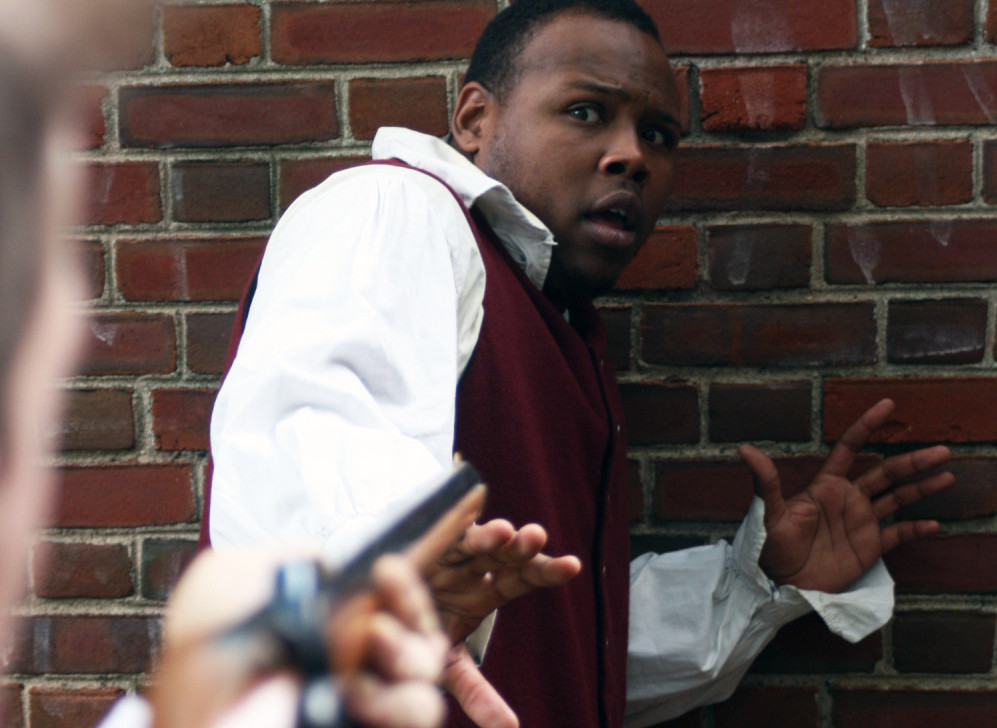 The story of historical icon, Crispus Attucks (JaRon Battle), the first fatality in the Boston Massacre, 1770, hence the American Revolution, is vibrantly reimagined and offered for reflection and fresh inquiry in Leah Lawler’s world premiere. Her dramatic dialogue brings to the fore the flavor of the era, including a sprinkling of colonial oaths, and manages to infuse some comedy within the tragedy. As directed by John Doyle, the staging of this fabulous Fringe piece plunges the audience into the dramatic action taking place all around them at Fergie’s Pub’s second story space, which acts as the infamous Green Dragon Tavern, and allows anyone over 21 to take a drink with Crispus and his stage companions: a newsboy, a British soldier, and Samuel Adams (all played by Ned Pryce). It’s nice being free to choose, something Crispus Attucks attempted at a particularly dangerous time in history.

JaRon Battle brings immense vitality, expressiveness, and warmth to the role of Crispus Attucks through his speech, movement and overall stage presence. Ned Pryce practically shapeshifts through his multiple characters, switching accents and attitudes with ease. His comedic side is seen, especially when as a lonely redcoat he recites Vogonic-like poetry to Crispus, whose reaction to it is also fabulous. Superb utilization of space, sound (Luke Moyer), and period costuming (Jenna Kuerzi and Rory Zummo), complete the feeling of being amidst a living, unfolding segment of history.