“She began dressing, too. Only now, looking at her, Kovrin realised the danger of his position — realised the meaning of the black monk and his conversations with him. It was clear to him now that he was mad.”  —Anton Chekhov, “The Black Monk” (1894) 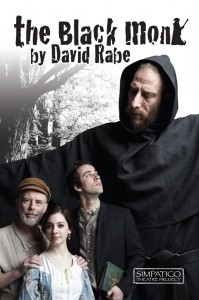 Timeless works such as The Seagull and Uncle Vanya confirm Anton Chekhov’s reputation as a master playwright, but to lovers of literature the Russian writer’s greatest creations will always be his short stories. Innovative, evocative, and meaningful, Chekhov’s stories influenced entire generations of premier English-language writers: Katherine Mansfield, James Joyce, Ernest Hemingway, and Raymond Carver, to name but a few. On the page, Chekhov’s best shorts contain all the drama and subtext of his plays. Tony Award–winning playwright David Rabe (an alum of local Villanova University) adapted “The Black Monk,” an exemplar of  Chekhov’s mastery of the short story form, into a new stage piece. It’s no surprise the result has beenpraised across the country since its 2003 premiere.

Described as “a cautionary story about human legacy and the true nature of artistic creation,”  the adaptation has by all accounts captured the soul of Chekhovian drama with Rabe’s “most haunting and poetic play to date.” Sympatico’s production promises a sure hit.