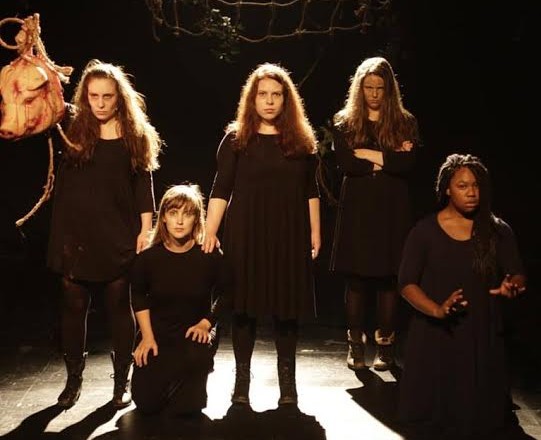 Five wicked young women seem to have leaped out of Arthur Millers’s The Crucible and onto Arden’s Arcadia Stage to stir up some trouble, however, the flavor of this theatrical piece, written by Molly Lang, piques the palate more like a craft brew. All wearing plain black frocks, dark shoes and dark stockings upon a shadowed stage, the women immediately conjure witch-like connotations and a craving for dark powers so as to exceed their present realm of incapacitations. Abigail (Molly Lang) is madly in love with a man she cannot possess, Mercy (Terilyn Elise Eisenhauer) wants some excitement, Tituba (Sierra Leverett) wants out. Mary (Anna Clare Kerr) longs for affection which is not accepted, while her sister Lizzie (Lizzie Kehoe), a pox survivor, screams and moans uncontrollably, like a wraith let loose from Hades. Yet there is one who can keep her poor wracked body in check… a malevolent mavin whose powers the women commit their souls to via ritual and sacrifice in order to achieve their youthful dreams and desires, which they feel, elsewise, have little room to flourish.

The intensity and cohesion of the acting, and movement, under the direction of Pati Amoroso, bring vitality, and validity to Lang’s provoking story. Sound, lighting (Katherine Craig), scenery and set aid in making the show intriguing, and costuming completes the overall effect.