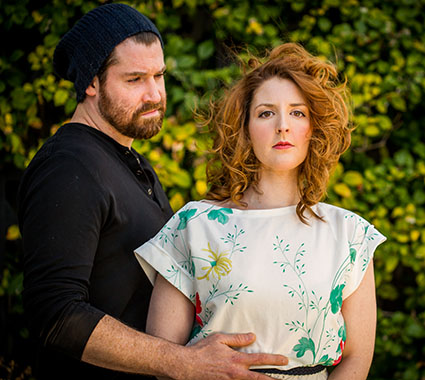 Deep Blue Theatre Collective, a newly hatched company of Villanova MA theater alums, has picked a stone classic for their debut at the fringe. They could have chosen easier fare, something funky and fringy. But they went for the jugular with their serious staging of STREETCAR, Tennessee Williams’s beloved, hard, and overheated play. Although often produced at college theaters, it’s a challenge to do it really well. Directed by Meg Trelease, Deep Blue’s production does right by Williams with drive, skill, and attention to detail.

Fringe elements open the show. Blanche (impressive Rebecca Jane Cureton), lost in front of the Maas Building, encounters theatergoers to ask directions to Elysian Fields. Mercedes Simmons (various parts) and Joanna Volpe (Eunice), wonderful in their roles, ad lib together and welcome the entering audience. The cast is strong: Victoria Rose Bonito (Stella), Kyle Fennie (Stanley), Newton Buchanan (Mitch), Shaun Yates (Steve), Brock D. Vickers (several roles). An inspired feature is the addition of accompanying original music (by Mike Benson, Mike Stanley, Timothy Zelinsky, Ben Cureton), well played by pianist, Kevin Mucchetti. While more congruent and modulated lighting would have been welcome, the company’s scenic design and use of the Maas space is exemplary. Rather than a “radical reimagining” as it’s billed, the production comes across more as a muscular, atmospheric approach to classic theater. It’s also not an “immersive” experience—unless you count the pre-show bourbon. After the opening, Blanche is the only character who sometimes ‘sees’ the audience. But immersion is unnecessary. Grittier than the 1951 movie version, on which many theater productions are based, Deep Blue’s STREETCAR is a keeper.