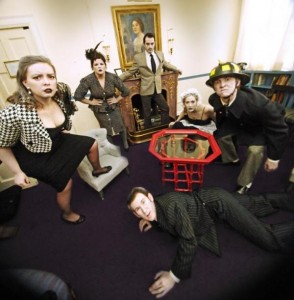 absurdest masterpiece The Bald Soprano (“La Cantatrice chauve”) ends as it begins: with an Englishwoman talking about french fried potatoes. Her husband isn’t listening, but this failure of communication is small fry compared to the complete breakdown in language and logic that takes place between these scenes. The dialog becomes separated from reality, sentences begin sensibly but devolve into nonsense, the characters talk in disconnected platitudes culminating in a chaotic chant of broken syllables. So how could you make this classic of the theater of the absurd even more absurd? Philadelphia’s BRAT Productions has found a way: run the entire 60-minute play twenty-four times in a row with the same, increasingly fatigued actors.

First staged in this form in 1997 and reprised to great acclaim in 2007 and 2010, BRAT’s A 24-hour The Bald Soprano has become a Philadelphia theater institution and a rite of passage for some of the city’s best up-and-coming actors. This years version features just one returnee from the 2010 version: Bradley Wrenn in a new role as the fire chief. Also testing their stamina are Gwendolyn Rooker as the maid and John Jarboe, Sarah Schol, Megan Slater, and Griffin Stanton-Ameisen as the Smiths/Martins. The mayhem will be directed by BRAT artistic director Madi Distefano.

A 24-Hour The Bald Soprano runs from 8pm to 8pm, February 24-25, 2012, at Plays and Players theater (1714 Delancey Place, Philadelphia). Tickets ($20) are sold in two-hour blocks that guarantee admission that time period, but also grants access to all other performances as space permits. Coming and going is recommended. Details here.