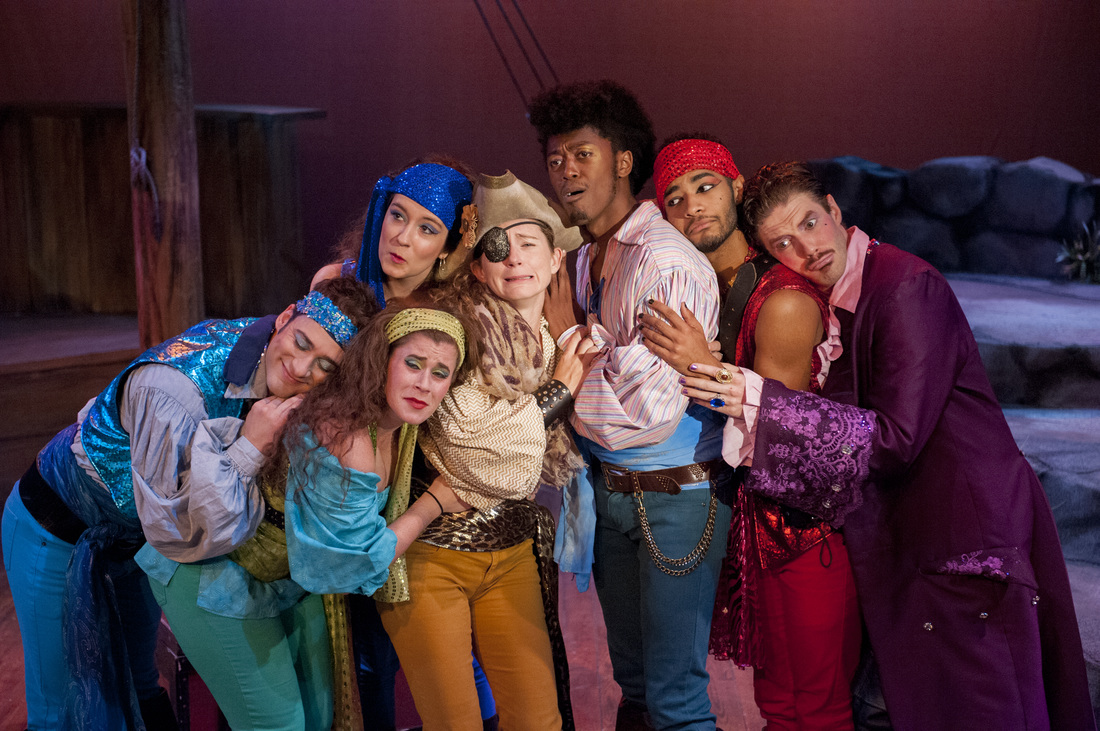 “Gay PIRATES OF PENZANCE? Isn’t that redundant?” This was almost everyone’s response to hearing of the Mauckingbird Theatre Company’s production of the slapstick classic. It’s more like Gilbert and Sullivan’s zany comedy is finally fully realized.

The sequined costumes and glitter makeup fit right in with the sweet, ineffectual pirates’ aesthetic. Dan Dunn’s kitschy choreography is a self-aware stereotype, complete with Vishnu arms and jazz hands. The gender-queering of the roles adds new and hilarious meaning to the simplest interactions. Jake Blouch, as the Pirate King, is fabulous in every way. The Major-General’s (Larry Lees) frilly nightgown ballet is hard to see through tears of laughter. The actors’ faces are the straightest thing about the play; they somehow keep from cracking up the whole time.

Frederic (the comically earnest Garrick Vaughan) is a young pirate intern. On his last day of servitude, he’s very sad to have to dedicate the rest of his life to exterminating his pirate family. They understand of course. In Victorian England, duty is the highest calling, and these are gentle pirates. Frederic meets a family of “virgins” (changed from “ladies”) and asks if even the ugliest of them would have him. The boys are interested, but alas, Frederic is the lone straight man in the play. Eventually, the chaste and clueless Mabel (Laura Wittenberger) agrees, with stratospheric cadenzas, to marry him. The pirates appear and also want in on the virgins. Luckily, their father, the Major-General, arrives in time to save them. His song “I Am the Very Model of a Modern Major-General” is always a highlight of the operetta, and Larry Lees does not disappoint. His gleeful eyes and well-used sporran accentuate perfectly the rapid lyrics.

The second act is as delightful as the first, although it skips over the beautiful “Leave Me Not To Pine Alone”. It introduces the police unit, who dance with slightly over-used phallic billy clubs. The ensembles in the play are as comedically strong as the leads. Each member, many of them Temple students, expresses a slightly different personality of the crew or family or squad. The singing in the play is equally professional. Whittenberger’s high notes have a beautiful vibrato. Vaughan’’s tenor is strong and sweet. Blouch owns the role of Pirate King and artfully switches from singing to inflected speaking during a long explanation of Frederic’s predicament. (He was born on Feb. 29th, therefore he’s “just a little boy of five” and not free of his contract). Lees knows exactly when and where to roll his r’s for greatest effect.

This is a play I’ve seen many times. The friend who joined me is a PIRATES virgin. Both of us were impressed by the caliber of the performance and were breathless with laughter throughout. It’s as if the director, Peter Reynolds, has uncovered gay treasure, buried by incompetent pirates Gilbert and Sullivan.