With the Syrian refugee crisis becoming a major international issue, the Cuban exodus of the 1960s and its continued legacy merits renewed consideration. Iraisa Ann Reilly’s new play ONE DAY OLD tells the story of one aspect of this migration, Operacion Pedro Pan, through a dream, placing it in a modern context. Ahead of her world premiere Fringe production, performed at the Hamilton Family Arts Center at The Arden through a corporate sponsorship from Cuba Libre Restaurant, Iraisa tells Phindie about this under-considered historic episode and the play it has inspired. [Hamilton Family Arts Center at the Arden Theatre, 62 N 2nd Street] September 8-18, 2016; onedayoldtheplay.com; fringearts.com/one-day-old. 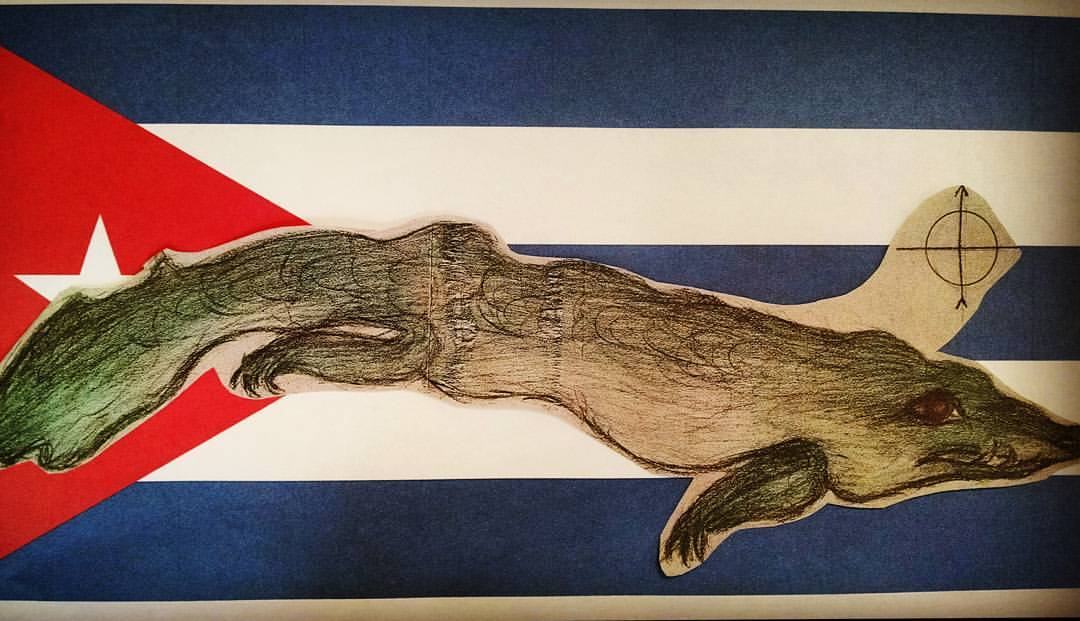 Phindie: What inspired ONE DAY OLD?

Iraisa Ann Reilly: The first draft of One Day Old was written as a part of my senior thesis project at the University of Notre Dame six years ago. My mother is from visiting Cuba and I spent a lot of time as a kid with my grandparents, in a bodega that my grandfather owned. I’d written a fiction story based on my family, the bodega, and the Cuban Exile experience in the United States. The story was called “Embargo” and I wanted to turn it into a play. In order to do the thesis I needed to do research on the Cuban Exile experience as a whole. The first book I read was called Operacion Pedro Pan by Yvonne Conde, which told the story of this underground operation that took place between the United States and Cuba in the early 1960s which brought over 14,000 unaccompanied minors to the United States.

Phindie: That’s not something most Americans are familiar with. What was Operacion Pedro Pan?

Iraisa: It was facilitated through Catholic Charities in Miami (spearheaded by a priest named Bryan Walsh). There was some involvement with the CIA, Jewish Family Services and other Christian groups as well. It started off with a boarding school in Havana that would work to get these children student visas to the US, and they would be taken into the hands of these organizations once they were on American soil. The children were settled in makeshift camps, orphanages, and homes throughout the entire country. Parents were sending their children out of fear of a law that was enacted called Patria Potestad, which meant that the government owned everything—including children. They were afraid that government officials would take their children away from them for communist indoctrination. They chose to send their children, assuming that the Castro regime would fall and they would be reunited in a few months’ time. That scenario, of course, did not happen. Some children were separated from their parents for months, some for years.Some were never reunited.

Phindie: That’s tragic. The name is evocative; how did you incorporate the Peter Pan story into your work?

Iraisa: It was called Operacion Pedro Pan because the children were being flown to the United States on airplanes, and they were drawing a similarity in the sense that the children were flying like Peter Pan. As a part of my research, I looked into the history of James Barrie’s Peter Pan, which started out as a play. There were many similarities in the thematic elements of this true story that these Cuban children experienced and the Lost Boys in Barrie’s story. These children were lost, in a place they were not familiar with, and essentially orphaned since they were without their parents. In the play I created a dream world where the idea of Neverland and Operacion Pedro Pan meet. It begins in the present with an 18 year-old woman in college named Wendy who has lost a necklace her father gave her—the only family heirloom that her father has since he came from Cuba and had to leave everything behind. She has trouble connecting to her roots, until one night, in a dream a young man named Pedro comes to her and takes her on a journey to experience what the children of Operacion Pedro Pan went through.

Phindie: Why is this story particularly relevant now?

Iraisa: I wrote this play six years ago, but it has become particularly relevant within the last year. The Cuban Exile experience is unique, and while the events of this story happened over fifty years ago, there are hundreds of thousands of displaced refugee children today—from Syria and the Middle East, to the Mexican and Central American Children in the United States today. We are at a point in our nation where I don’t think everyone empathizes with the plight of these families who have to make an incredibly difficult decision in sending their children somewhere that is unknown, because the place that they are in is definitely worse. Today, some of these children are orphaned because their parents have been killed in terrorist attacks, or their parents are being deported. Families are being torn apart and history is repeating itself. There are many different opinions as to whether or not Operacion Pedro Pan was successful. Some of the children (who are now adults), claim that they understood why their parents sent them, that they had a positive experience in the camp, orphanage, home, etc, and they are not bitter about the experience. Others say that it was the worse thing that ever happened to them. Operacion Pedro Pan was not the first operation of its kind. During World War II, an event called Kindertransport brought children from Europe to the US. It’s relevant now because its happening again, and we need to figure out a solution for handling these displaced families. If children must be separated from their families, what is the healthiest way of raising that child? How do we ensure that a child does not fall through the cracks? How do we keep families together?

Phindie: There’s also been a shift in U.S.-Cuba relations.

Iraisa: Yes, an added layer to this relevance is US relations with Cuba have suddenly become a hot topic in the media. As a Cuban-American, it was disappointing that relations started to open up after fifty years without a significant change in the government. It felt as though the last fifty years were forgotten, and the pain that these families (and mine) experienced just became a chapter in a history book. I think that telling this story puts it in a modern context—one of the struggle of identity that continues to exist for those who live outside of their culture in the United States.

Phindie: How important is theater to Cuban or Cuban American experience?

Iraisa: There are several Cuban-American playwrights, and theater, art, and music is incredibly relevant in Cuban culture. One of my favorite Cuban-American playwrights is Maria Irene Fornes, who was a mentor for my playwriting professor in college, Anne Garcia-Romero. Fornes wrote a play called Letters from Cuba where a brother and a sister are separated by the Embargo, but write letters back and forth. A lot of Fornes work had elements of magical realism (which is a device used in a lot of Latinx theater, including One Day Old).I believe that we preserve our culture through the arts. I also believe that we preserve our culture through language, which is why it was so important to use Spanish in this play.

There are also a lot of well-known Cuban-American artists who came artists through Pedro Pan, including playwright Nilo Cruz, and musician Willy Chirino, who write a lot about this exile experience in their work. 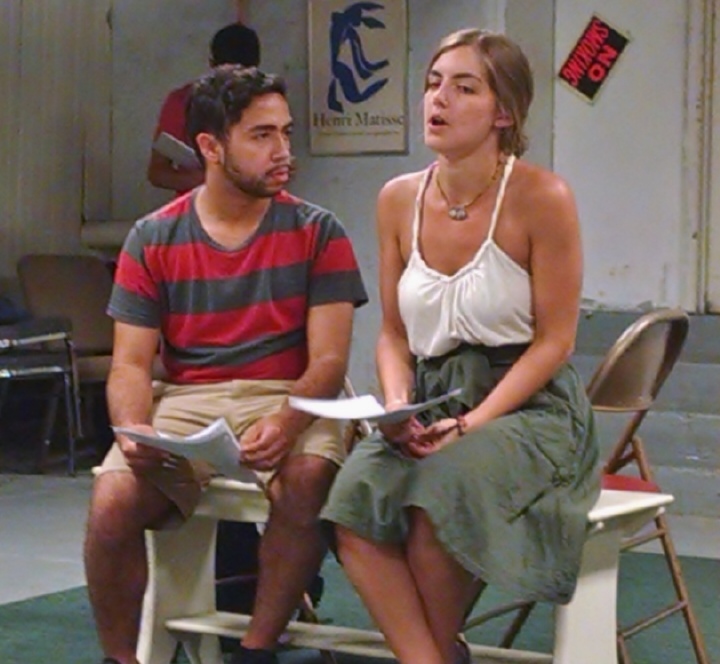 Phindie: What do you want audiences to take from this production?

Iraisa: I want audiences to have empathy for the exile experience, the refugee experience, and a greater understanding of the Cuban American Experience. It is a bilingual piece. I grew up speaking two languages. Half of my family spoke English and the other half spoke Spanish, yet they still understood each other. I want the audience to feel that we can still understand each other on an emotional level and break down barriers that are created through social differences, yet at the same time embrace cross-cultural diversity. As a writer I want everyone to recognize a bit of themselves in the piece. It doesn’t matter if you are Latino, White, Black, Asian, or any other race or ethnicity. The human story is a collective story and I am optimistic enough to believe that we can recognize a bit of our own experiences in the struggles and experiences of others.

Phindie: Why did you want a portion of sales to benefit Children’s Hospital of Philadelphia?

Iraisa: In college I was inspired by my professors and peers to create work that serves a purpose, that makes an effort to create social change, and that has an impact beyond the stage. I wanted this play to have a positive impact for an organization in Philly. James Barrie gifted the rights of Peter Pan to Great Ormond Street Hospital in London in 1929, and it has continued to benefit from the story after his death. Since his work was an inspiration for this play, I decided to reach out to The Children’s hospital of Philadelphia to serve as a beneficiary from this work. If people want to donate beyond the ticket price they may do that as well when they come see the show. While I should stress that this is not a children’s show, it’s a show about growing up too soon—something that kids who are facing a life-threatening illness have to deal with.

Phindie: Tell me a little about your cast and crew?

Iraisa:  They are a mix of seasoned and up and coming Philly theater artists. They’ve brought their unique perspective to the work, and have had great insights as this is a play in development and its first performance.

My director is Jose Aviles. Jose is the director of education outreach at the Arden and has been a theater artist in Philadelphia for over 20 years. In 2014 Jose directed a reading of the first draft of One Day Old. He has been an incredible mentor and friend over the years that I have been working as a professional in Philly As an actor He can be seen during 2016 Fringe Festival in rep performances of Blood Wedding and I Only Came to Use the Phone in The Duende Cycle.

My set designer is Charlie Gallagher. The cast is Tyler Elliot as Pedro, an 17 year-old man who came over through Pedro Pan; Alexis Prozonsky as Wendy, an 18-year-old woman of Cuban-American descent in her freshman year of college; Elias Rivera as Gancho, Pedro’s younger brother; Diana Castanar Rodriguez as Sara, who takes care of the Lost Boys in the Camp; Victor Rodriguez as Tio Juan as is a grown man from Cuba living in the Bronx and struggling and Hermano, one of the children in the camp; Melissa Sabater as Hermana (Hermano’s sister) and Tina (Gancho and Pedro’s little sister); and Maria Aviles Locke as a mother,.Mami.

Phindie: Do you have any other picks for this year’s festival?

Iraisa: I am excited to see the Duende Cycle: Federico García Lorca’s Bodas de Sangre (Blood Wedding) and I Only Came to Use the Phone, inspired by the short story by Gabriel García Márquez

ONE DAY OLD
Hamilton Family Arts Center at the Arden Theatre, 62 N 2nd Street
September 8-10 at 7pm
September 11 and 18 at 4pm
Tickets are $25; September 8 is a special Pay What you Can preview. Corporate sponsor Cuba Libre is offering a dinner and a show option for $60. Reservations can be made by calling 215-627-0666.
onedayoldtheplay.com; fringearts.com/one-day-old.