Eugène Ionesco has been good to the Idiopathic Ridiculopathy Consortium. The last two Fringe Festivals have seen Philadelphia’s favorite (er, only) absurdist theater troupe score huge hits with offerings by the Romanian-French playwright. IRC follows up 2014’s Rhinocerous and 2015’s Exit the King with another gem from the Ionesco catalog. We spoke to IRC artistic director Tina Brock ahead of The Chairs. [Walnut Street Theatre: Studio 5, 825 Walnut Street] September 6-25, 2016; fringearts.com/eugene-ionescos-chairs. 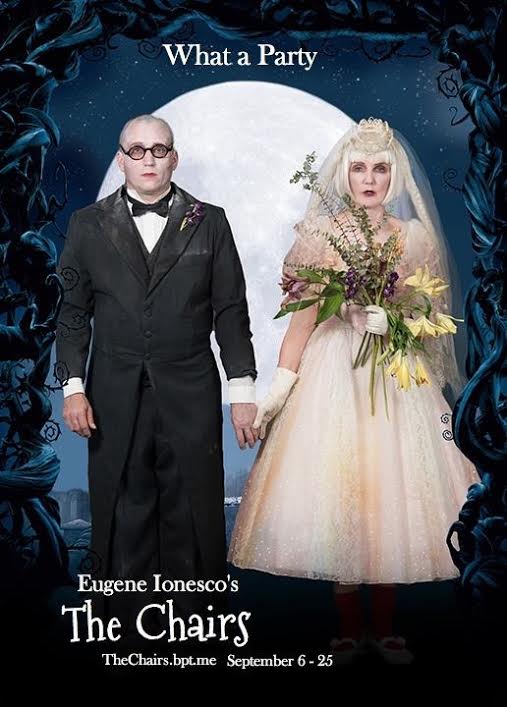 Tina Brock: But, of course! We are considering performing Ionesco’s works during Fringe in the future – the canon is extensive and not frequently performed.

Phindie: What attracts you to him?

Tina: A critic once coined the phrase “Ionesco anticipation” – the sense that anything can and will happen on stage in an Ionesco show.  Performing and directing his work is great fun – the execution combines sport (emotional, verbal and physical gymnastics) poetry, dance.

Ionesco sets daunting tasks for the artists:  multiplication of objects, ideas and words, and asks the artists to juggle.  The tone is the incredible lightness of being mashed up with the solidity of existential crisis, creating an interesting blend of ideas and emotions.

He shied away from dictating how to manage the theatrical feats proposed, the result is the imagination of performer and audience get a workout, raising the experience to another level.   Performing Ionesco is walking a balance beam.  Exacting and demanding.

Phindie: What do you like about The Chairs in particular?

Tina: The Chairs is a homecoming for the IRC.  Along with Ionesco’s The Lesson, both were initially produced by the IRC in 2009.  It presents themes of longing for a better world outside our everyday existence – one that’s particularly resonant this year, as we experience the daily absurdities of our modern world.    Ionesco’s premise that language can be insufficient at times as a tool for communicating experience has certainly proven true this year; to say we are art a loss for words to explain recent tragic events is an understatement.

Phindie: Why do you think he’s particularly suitable for the Fringe?

Tina: Ionesco is an experience, and a rarely-performed treat.  This play captures beautifully where we are as a country and a company and the struggles we face, wrestling with pressing philosophical questions.

Phindie: What excites you about this production?

Tina: The beauty of the language, the relationship of the Old Man and the Old Woman, the physical demands of the script, the main theme that we each have a unique contribution to make, that we alone must tell our own stories. And believing we don’t have the confidence or the skill to communicate them is missing an opportunity to connect with the world.

And the idea that many students will see a show that likely will not performed again in this area for a long time.

Phindie: Tell me a little about your cast and crew?

Tina: The Chairs features three performers in the flesh: Bob Schmidt (also a founding IRC member); Tomas Dura, IRC company member since 2010 and Tina Brock, IRC producing artistic director.  Managing the mayhem backstage is Sam Eli (many, many, chairs arrive onto the playing area from the tiny storage area behind the circular lighthouse set). Set designer Lisi Stoessel has reimagined her original design from the 2009 production at Society Hill Playhouse; Erica Hoelscher delivered a fresh costume and makeup design based on favorite silent film stars; Robin Stamey will interpret the lighting design for our little lighthouse by the sea; I designed the sound.

…and many thanks to the hundreds of imaginary guests who come to the party to hear the Orator’s message every evening.

Tina: A sturdy, simple wooden school house chair – the kind used by the Old Man and The Old Woman in the show.

Phindie: How long has IRC been Fringing?

Phindie: How has the festival and the company changed?

Tina: As the IRC celebrates 10 years, we have weathered and grown to a place where we can wrestle with and interpret this material with joy.

As the IRC’s programming has grown over this decade, the window of opportunity has diminished to see other shows in the festival – the last 6 years we have presented a show that has run the entire span.  Early Fringe experiences, even before the IRC was formed, sparked a desire to be a part of the festival.  Now that we’re here, it’s created a scheduling problem!

Phindie: Do you have any picks for this year’s Fest?

Tina: I’m interested in The Elementary Spacetime Show by Cesar Alvarez, CITIZEN by Fist and Heel Performance Group, Room 21 by Jace Clayton, Notes of a Native Song by Stew and Heidi Rodewald, and Sounds From the Bench, Political Appropriations by Ted Heane, plus a bunch of independent shows I won’t have time to see.