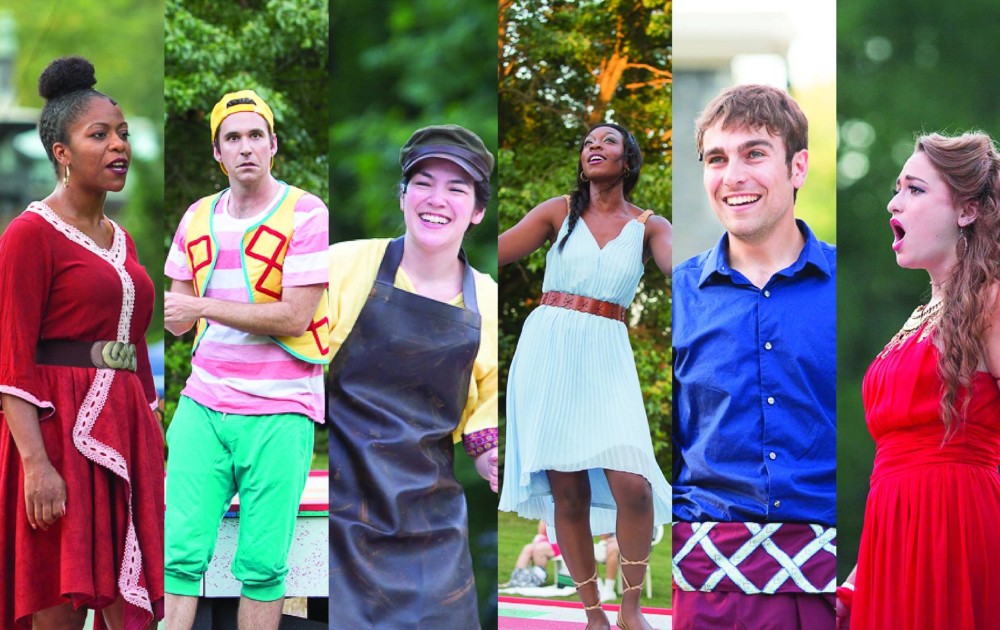 Uncharacteristically, David Stradley’s production of THE COMEDY OF ERRORS runs away with itself, so the pith of the farce doesn’t take hold as firmly as it might. Costumes allow you to distinguish the twins Antipholus and Dromio, one from the other, but Stradley’s production never involves you in the plot. The emphasis is on the physical comedy, which is played well, especially by Sean Close, but at the expense of easily following all that is going on and whom it involves. No actor disappoints. The pace of the show is quick, and it hurries past some of the subtleties, few though they are, Shakespeare provides. Matters never seem to have the time to settle or take hold. It isn’t so much that the production is confusing as it speeds by so quickly, it doesn’t invite you to pay attention or follow along. Farce overrides substance, which if played more carefully, would have the production funnier.

The actors, in general, do well. Luke Brahdt continues to impress with his range. He has been this season as an adolescent, as a fop, as an intense politician in a musical, and now as the put-upon Antipholus who is thwarted and unrecognized in his hometown, Ephesus, because his lookalike brother, from Syracuse, has landed in Ephesus while on a journey searching for his twin. That search is begun to please a pining father whose life is in peril in Ephesus. In this production, all that is confusing seems too clearly logical. Two and two should be put together faster in the minds of the characters, especially because two of them know they are looking for their twin. Brahdt nicely anchors his scenes, as does Savannah Jackson as Luciana, sister-in-law to one Antipholus and wooed, disturbingly, by the other. Danielle Lenée is another who has shown range in several roles, most recently in Bruce Graham’s White Guy on the Bus, and she does a nice fussy job as the local Antipholus’s wife, Adrianna. As mentioned, Sean Close is great verbally and physically in his comic turn as Dromio of Syracuse. His Ephesian counterpart, Brian Reisman, is also deft and entertaining. Brendan Moser also has a sure comic touch as Antipholus of Syracuse. James Reilly is impressive in supporting roles. Read more on Neals Paper >>>
[Rockwood Park, 4651 Washington Street Extension, Wilmington, DE] July 15-31, 2016; delshakes.org.