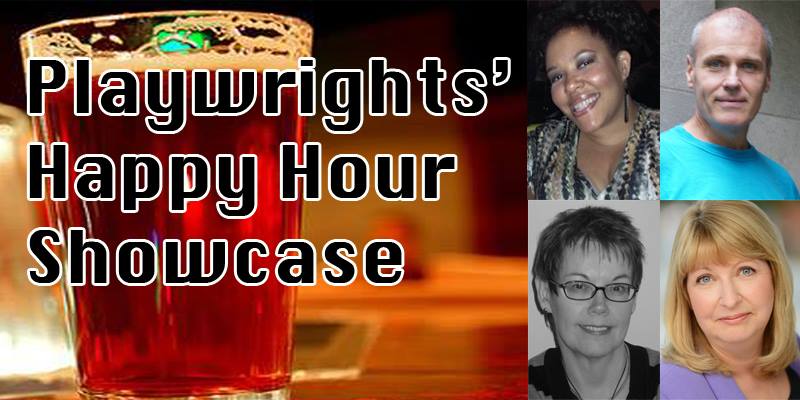 In 2014, playwrights Gregory Nanni and Bruce Walsh founded the Playwrights’ Happy Hour in Philadelphia, creating an intense development program for members of the Philadelphia Dramatist Center (PDC) which gives the playwrights room to experiment, play around, and write in a supportive environment, co-moderated by Nanni, Leah Lawler, and Shelli Pentimall Bookler.

In 2016, after discussions with Lawler, the current PDC president, Playwrights’ Happy Hour Showcase was set in motion. The team decided to ask playwrights to submit the first 20 pages of their full-length scripts, as it was felt that that many pages worked better than only ten pages to show a playwright’s talent. For the first staged readings of the new Showcase with professional actors, the team selected PDC playwrights who have attended the Playwrights’ Happy Hour and whose samples were already of a high quality.

Any playwrights interested in joining Playwrights’ Happy Hour and getting their scripts considered for next year’s Showcase are invited to attend the meetings at Fergie’s Pub (2nd floor) every other Monday from 6-8 PM, where members and guests listen to scripts being read and discussed while enjoying plates of appetizers and pitchers of beer. Greg Nanni called Playwrights’ Happy Hour “Philadelphia’s cheapest year round open-access playwright workshop.” PDC membership costs only $50 and includes a full year of workshops, drinks, food, and more. For more information and updates, check out the Facebook page, join the Philadelphia Dramatist Center, and subscribe to the listserv (free of charge) by emailing pdcopportunities@gmail.com.

Keenya J. Jackson: “PDC Happy Hour helped me the most workshopping my scenes.”

The idea for the play came while I was sitting in the lunch room at work and listening to women have a discussion about The Bachelor and Real Housewives of Atlanta. I don’t watch a lot of reality TV, but I found it interesting that these professional women were deeply absorbed in what was happening with the people on the show. It’s as if adding the word “reality” makes people on TV seem more real or personal.

Once I started writing, I wanted to demonstrate that the way women are being portrayed on these TV shows, even if entertaining, can damage the way that we view ourselves and other women.

My play Real Images is about three women finding their own identities despite the stereotypes set up by reality TV and social media. The main character has a confrontation with a fan and a recording of the event goes viral. The women are left to deal with the aftermath from the video.

Capturing the tone of reality TV stars and social media was difficult for me. I didn’t want the characters to become stereotypes. Another hurdle was editing the play. I tend to over-edit my writing. This is where the PDC Happy Hour helped me the most as I was able to workshop my scenes. The feedback helped me to realize what was working in the play and what was not.

I would love to know what the audience thinks of the characters in the play. Are they relatable? I would also like to know, if given the chance, would they like to see the play in full?

Thanks to my dad, I love musicals.  My dream is to one day write a musical, even though I don’t play music—and I sing off key.

Joe Byers: “Bringing their secrets out in the acid light of God’s own unrelenting gaze.”

God-struck is the spawn of a nightmare I had when I was 11, the same age as my central character. The witch in the play, Our Frances, has haunted me for years, demanding to get on stage.

God-struck takes place in 1983, the tenth anniversary of Rowe v. Wade. Tommy Murtaugh, son of two ordinary middle-class abortion clinic bombers, is hell-bent on training and fulfilling his dream of becoming a cabaret entertainer or talk show host by attending an ancient Greek drama camp this summer. However, his parents are determined to send him to Webelo Scout camp instead, wanting a more normal American life for him. In desperation, Tommy, to get them out of the way, identifies his parents to the police as the bombers. Enter Our Frances, a terrifying gender-indeterminate babysitter who forces all the Murtaughs to bring their secrets out in the acid light of God’s own unrelenting gaze.

I love bad plays nearly as well as good ones, because I learn more from the bad ones.

BIO:Joe Byers has been produced, workshopped, and awarded by organizations in New York (Lark, Abingdon, Diverse City) and Boston (Centastage, Theater Offensive), as well as Actors Theatre of Louisville, and many others from Sioux Falls, South Dakota, to Pune, India. kayjaybyers@gmail.com

Julie Zaffarano: “I cut more than 30 pages, giving audiences back 30 minutes of their lives.”

I fell in love with the play 39 Steps [a melodrama by Patrick Barlow, adapted from the 1915 novel by John Buchan and the 1935 film by Alfred Hitchcock] and challenged myself to write using a crazy, multi-character concept. At the same time, I was taken by the thought that many people have a special someone in their past and wonder “what if” they were to meet again. The PlayMakers was born out of coupling these ideas.

The PlayMakers is the story of Lisa and Sebastian, a successful romantic comedy playwriting team and lovers whose professional and personal relationships unravel, crash, and burn. After several years apart, they are thrown together by a producer to create a revival play. As they try to recapture their signature spark, their characters revolt as the lines between reality and fantasy blur.

The first draft of The PlayMakers was much too long, but I had no idea how to streamline the script. Through PDC and PlayPenn, I found camaraderie, support, and education in the craft. Ultimately, I cut more than 30 pages, both improving the play and giving audiences back 30 minutes of their lives.

While The PlayMakers is a comedy, it reflects many realities about our relationships. I would like to know from the audience if they can relate to the characters, their foibles, and their search for true intimacies.

I get emotionally wrapped up in my characters. I talk with them, worry about them, and fall in love with them. I laugh out loud and cry buckets of tears when I’m writing. Consequently, I usually write at home rather than in public coffee houses.

BIO: Julie Zaffarano, holding two Master’s from Villanova University, appreciates the support from PDC, PlayPenn, Dramatists Guild, Cloverdale, and Rose Valley. Her play, The PlayMakers, named “Best New Work” by What If? Productions 2016 Playwrights Festival in Charleston, SC, will be produced in 2017. Julie’s most recent play, Kentucky Lemonade, was featured in PDC’s Readings in Cafes program.

Robin Rodriguez: “With this play, all the work and the frustrations have been worth it.”

I frequently write stories of those who see themselves as outsiders, and that’s probably where LOVED ONES began, dealing with a querying of relationships. Will online relationships work or is physical presence required? Must one be truthful, or is fake intimacy enough? Relationships are hard. Would you hire a life if you could?

Crystal needs a life. Fortunately, she’s found an agency that will provide friends and family—for a fee. In this comic fable about giving and getting, a hospital vigil draws out the truth of what human connection can cost versus what one is willing to pay.

Leon was a problem character: fun, but too quasi-magical. I wrote the first draft in 2009, then workshopped it with Philadelphia Theatre Workshop in 201Still, I had no clue what to do with him, so I shoved him and the script in a drawer for four years.

A year ago, I fired Leon and hired Leona instead. Five major rewrites later (and a big thank you to my dramaturg, Heather Helinsky), I’m finally starting to get there.

Being an audience to a new play is hard. Usually, right after I hear a new piece, I’m confused. I appreciate that you are coming on a summer’s eve when you could be doing a thousand other things instead. You don’t have to tell me anything about my play if you’d rather not. Your presence is gift enough.

I’m not a theater person. Until we moved to Philly in 2001, I’d really only seen a handful of plays. But I now love writing plays.