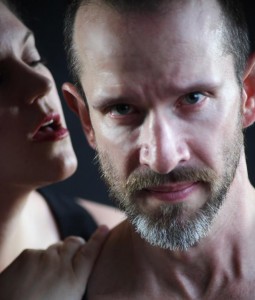 MACBETH is a violent play, a feature emphasized by the contemporary military garb and extended fight choreography in the worthwhile production by Commonwealth Classic Theatre Company. But the central question which Shakespeare poses is: does the title character shape his fate through his violent acts (“disdaining fortune with his brandish’d steel”), or is his rise and fall predetermined—guided or at least foretold by the three witches. (Don’t buy the “blame the lady” line.)

To be a compelling agent in his fate, a Macbeth needs more gravitas than Charlie DelMarcelle conjures under the direction of Joshua Brown. But in a soft-spoken performance (some lines are too quiet to properly scan), DelMarcelle convinces as a man driven mad by events he can’t control. And elsewhere, Shakespeare’s vibrant language and piercing insights are brought to life in strong turns by Sean Close as Malcolm, Adam Altman as Duncan, and John Jezior as Banquo, among others. August 8 to 25, 2013, commonwealthclassictheatre.org.