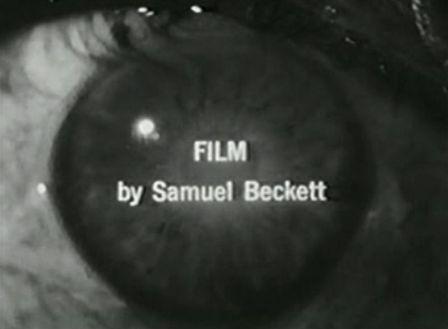 There’s a story here, you may have heard it. It goes something like: “In 1965, Samuel Beckett, Buster Keaton, and Boris Kaufman made a movie. They had a very bad time and they didn’t do a very good job, or maybe they did, but nobody would have been able to tell.”

If you’ve heard of Film (the film), you’re probably familiar with the story, or something like it. Its inscrutability does more to sell it than the people involved.

Blessedly, the 24-minute original Film-film has accompaniment, a 140-minute ‘kino-essay’ which is not Film (fairly straightforward), but is a documentary about Film (and so: not quite a film, in a sense, if we’re willing to get a little metaphysical about it), and which calls itself Notfilm and which exists to explain what needs explaining, to historicize where history was not, and to anecdote, where previously there had been only silence. (Film and Notfilm were screened together July 8, 2016, at the International House, 3701 Chestnut Street; ihousephilly.org.)

Ross Lipman, the director of Notfilm (2015), prefatorily professes to be uncomfortable with this enterprise; art, he suggests, should not be about art, but about life. I too am uncomfortable, though for different reasons. It’s the story that troubles me (the one I told you about earlier): The notion of inscrutable film (Film) serves only to mystify the Film-film.

In Film, the camera focuses on a single man. Though there is no dialogue, the camera is visibly disquieting to him. Other people are disquieting. The eyes of animals are disquieting, along with mirrors, windows, a picture of God, and pictures of himself. He does not want to be seen, by himself or others. You can feel the claustrophobia of the room sitting in your chair.

Every movement of Film accentuates this with an immaculate formalist rigor. There’s a tidy emotional through-line there. Simple enough, when you’re in on the joke, less an idea, more a feeling, asked to play the part of a film. And yet, an explanation is desired, a particularly academic sort of embarrassment, that it couldn’t possibly be art if it didn’t need to be explained.

The intrusions of explanation, though, fill a happily meager amount of our time in Notfilm. There’s a sprawling history lesson here, strung on a framework of miniature biographic essays of key players and extensive interviews. There’s a gleeful irresponsibility here, in which the construction of a robust oral history is comprised in no small part of bickering and gossip. There’s a jaunty game of tug of war there, maintained by the interviewees, all attempting to construct their own history around Film, while Notfilm is allowed to construct another. The expansion of history, buoyed by discrete moments of genuine pathos within the interviews provides a particular voyeuristic nutrition that could only possibly be delivered by the surveilled recollection of old memories.

This all leads to a particular moment, late in the Notfilm, in which everything aligns perfectly. At this point, we already have a fairly strong view of Beckett, solitary, protective of his privacy, deeply distressed by the notion his image or voice might be recorded. Then, we learn through interview of a secret tape recorder, present at meetings surrounding Film. Lipman plays up the rarity of recordings of Beckett’s voice, admits to not having Beckett’s blessing, and finally, with an audible shrug, simply plays them anyway. The camera gets what it wants.

Those first few moments of grainy, analog Irish lyricism, wrapped up in a film so focused on a man wishing not to be focused on, are magnificently perverse. There’s marrow there, and a pulse, and Notfilm finds itself engaging in a genuine dialogue with Beckett and Film and perception, rather than simply explaining. It is Notfilm, you understand, a reenactment of Film, firstly as historical reconstruction, but engaged as a matter of its substance with the same desire to be unperceived, to avoid being seen as a film. Somewhat perplexingly, neither Film nor Notfilm are films nearly to the extent that each is a picture of a feeling.