“There are things in that wallpaper that nobody knows about but me, or ever will.”—Charlotte Perkins Gilman, THE YELLOW WALLPAPER

Charlotte Perkins Gilman’s classic novella THE YELLOW WALLPAPER is a haunting tale of one woman’s mental collapse in the suffocating world of 1890s New England. Local actor Jennifer Summerfield’s staging of the complete text recently ran to rave reviews and sold-out houses at the Ebenezer Maxwell Mansion in Northwest Philadelphia. She’s bringing the production, directed by Josh Hitchens, to another historic home, the Physick House in Society Hill for a limited run July 10-15, 2016. We spoke to Jennifer about the book and how and why she brought it to the “stage”. (Photos by Kyle Cassidy.) 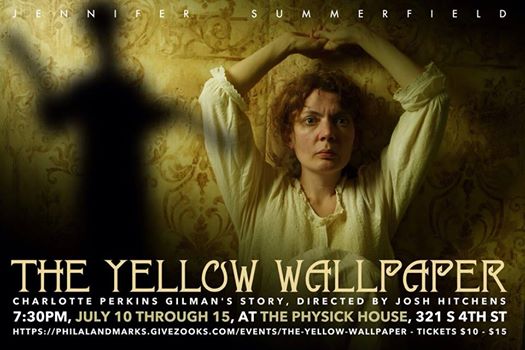 Phindie: When did you first come across THE YELLOW WALLPAPER? What were your reactions?

Jennifer Summerfield: I discovered the book when I was a senior in high school and I was completely mesmerized by it. As soon as I finished it, I sat on the kitchen floor and read it aloud to my mother, just to get those images out of my head and see if they were as powerful when spoken. I’d never read anything before, except perhaps Crime and Punishment, that made me feel I was losing my own sense of reality so completely, and was inhabiting the slowly unraveling mind of another.

Phindie: What inspired you to adapt this into a theatrical piece?

JS: I’ve wanted to perform a one-person show for a long time; as an actor, you’re so often at the mercy of other people’s schedules and projects and visions of who you are and what you’re capable of. It seemed like a potentially freeing and empowering step to take in my career. Josh Hitchens approached me about doing THE YELLOW WALLPAPER and I jumped at it immediately, remembering the effect it had had on me at the age of 18. Josh has performed in several brilliantly realized one-man shows over the past few years and he was the perfect person to direct this. The performance is the complete story, as written by Charlotte Perkins Gilman. It’s a dramatic monologue, lending itself perfectly to a site-specific production like this.

JS: A large part of the process, and the most grueling part, was the memorization of the story; the imagery is so strong and powerful that I was only able to spend an hour at a time with the script before I was mentally and physically too exhausted to take anything more in. It was all too easy to feel that I was a part of the wallpaper, trapped in the nursery. I had several moments of terror when I thought my brain might actually be incapable of committing the whole thing to memory, but Josh assured me that it would come. Before we met for our first rehearsal, I had spent a month memorizing at home, in coffee shops, between exits and entrances of another show, and it was a huge relief to finally speak the words to another person and get feedback. Josh was immediately very supportive and worked with me on how best to use voice and gesture to draw the audience in, since those were my two main tools. We met in my living room, and again, the power of the language and story were so exhausting, I only had the strength for a run-through of the show with a few notes, before I needed a break. We then had a technical rehearsal at the Ebenezer Mansion, where lights and costume came together. For me, a large part of a character comes together when I know what she wears and what she writes with. I met an historical costumer, Michele Schutte, who made me a wonderful, fluttering Victorian morning dress, and the pencil I use was one I found at the Philadelphia Pen Show and is an 1890’s silver combination mechanical pencil/pen, and I love it. 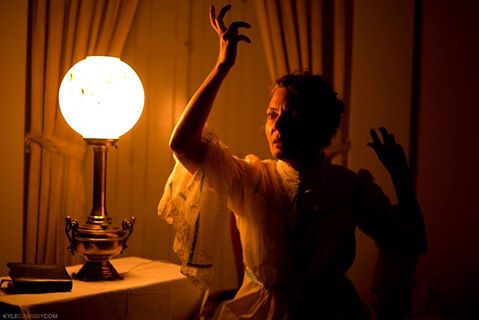 Phindie: You’ve been doing a few Victorian-era productions recently. What attracts you to the literature of that time?

JS: Yes, THE YELLOW WALLPAPER will be the second time I’ve had a hand at producing a Victorian
theatrical piece, having co-produced Hedda Gabler this past December at the Physick. Josh Hitchens previously directed me in A Doll’s House at the Maxwell Mansion as well. The three pieces, all written in the last quarter of the 19th Century, have a central female protagonist who is trying to find her place in the world and, in the end, is forced to question the traditional roles of women in the home and society. In all three plays, the audience is introduced to a seemingly happy married couple, but quickly find there are fault lines running through the marriage, that there are secrets and doubts and betrayals that threaten to destroy their lives. These are issues and questions we still have today, combined with brilliant writing and high drama. As an actor, it’s incredibly meaty and there are always new discoveries to be made in the text.

Phindie: What do you like about performing in these historic mansions?

JS: These are beautifully and lovingly preserved historic homes. Simply visiting them is like stepping back through time. When the audience, in such close proximity to the performers, enters, they become voyeurs into the lives of these people who so easily could have inhabited this very room. Everywhere the audience looks, they see authenticity. It’s thrilling to be able to bring that experience to theatre-goers. And as a performer, these houses have a warmth and life to them that you usually have to try to simulate on a theatrical set. What a luxury it is to be in a perfectly decorated room you don’t have to imagine into being. It’s simply there for us, a beautiful part of the production. PhilaLandmarks, who operate the Physick House, as well as three other historic homes in the Philadelphia region, have been incredibly welcoming to us and have made this a lovely experience.

Phindie: What are some of the challenges?

JS: It is, after all, first and foremost a museum, so we can’t be as casual with the space as we might be on a theater’s stage. Since THE YELLOW WALLPAPER is just me and Sam Wend, our stage manager, things are fairly simple. We’ll be bringing in a set piece and some lights that Robin Stamey, the lighting designer, will be using for dramatic effect, but since it isn’t a theater, and there isn’t a traditional lighting arrangement, she’ll be getting pretty creative with the design. I think it’s going to be fascinating against the yellow walls of the Physick House parlor.

Phindie: What’s next for you?

JS: Actually, concurrently, I’m performing at the Constitution Center, in the Bank of America Theatre, during the month of July. It’s a new play called “A Republic, Madam,” about the ratification of the Constitution and the friendship between George Washington and Samuel and Elizabeth Powel. We’ll be performing four times a day, six days a week, and I’m working with a great group of people.