For the record, Lucid prefers not to be referred to as Lucifer or any of those other names, and would like everyone to know that he does not live in some fiery blast below, but rather on the temperate South side of the paradisal city know as Heaven. There are a number of other issues Lucid would like to set straight, including his views on what happened between him, the other angels, thoughts on mankind, and the most painful story of all, the whys and wherefores of his fallout with Him.  According to Him (He says to call him ‘George’), however, Lucid just wanted more than He could give, and became jealous. After all, says George, there is all of Creation to attend, and oh so much music in it; “Music is my food. The world is my orchestra!”.  Elucidating upon how this sweet sustenance, and the particulars surrounding it, became a sticking point in their relationship, Lucid confesses to having stolen His song… 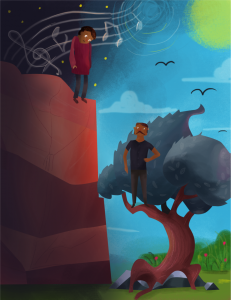 as charismatically told by Gavin Whitt, who plays both Lucid and George with elegant distinction. Lucid appears charming, compelling and soft-spoken, while George comes off as confident, in command, even fatherly as he peers out over his cool looking glasses. Costuming, props, and set along with wit and comedic moments are used to good effect in distinguishing character and tone. Red curtains about the stage lend a fitting hue too! Spencer Blevins’ splendid acoustic tunes complement the show, and are outstanding melodies on their own as well; hauntingly beautiful.

Lucid doesn’t sing any more. George reminisces at His favorite place on Earth, where the sound of ocean waves crashing remind him of Lucid’s singing.  Loss, loneliness and longing for love all play a part in this saga, but more than that, it is a brilliant, probing play, determined to break down barriers in bringing to light the question of, and the search for, truth.